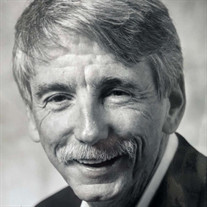 Edward M. Hanley 1931- 2020 Edward M. Hanley, of Hot Springs Village, Arkansas, passed away on September 11, 2020. He was 88. “Eddie,” as he was known to most of his family, was the youngest of 11 children born to Mary and John Hanley in Framingham, Massachusetts. His parents both emigrated from Galway, Ireland and met in Boston. Ed was born during the Depression, and, like all his siblings before him, worked to contribute to the household. He often recalled, not always fondly, that the children in the family managed a neighborhood paper route for more than 30 years. Of 11 brothers and sisters, Ed was the only one to venture far from home to live and work. After serving in the U.S. Army during the Korean War, he moved with his friend Paul Rinaldo to Flint, Michigan, where he met the love of his life and future wife, Marie DiGenova. They married in 1958. Ed completed his undergraduate work in Flint at the University of Michigan, and went on to earn a PhD in behavioral psychology at the University of Kansas. Along the way, Ed and Marie lived, worked and studied in Arizona, Wyoming and Kansas, before settling in Burlington, Vermont, where Ed eventually became a professor at the University of Vermont. Along the way, they had two children: Erin and Sean. Ed was a devoted teacher in the College of Education at UVM, where he taught aspiring classroom teachers who would go on to work mainly with students with significant behavioral and emotional challenges. Full of good humor, he was well liked and respected by students and colleagues who gravitated to his warmth and wit. He received hundreds of thank-you letters from students over the years, telling him about their lives and first teaching jobs, how they were applying what he had taught them in their own classrooms, how well prepared they felt to meet those new challenges, and thanking him for his support, advice, encouragement and understanding. Outside of work, Ed was a man of many interests and talents. Among his hobbies were fly-fishing, pool playing, lapidary work, stained glass, silversmithing, woodworking, close-up magic, woodcarving and golf. After retiring, Ed and Marie moved to Hot Springs, Arkansas, where they made many dear friends. Ed was a gentle, easygoing man. Long and lanky, he’ll be remembered for his teasing Irish wit and the light in his eye. His grandchildren and nieces and nephews will recall being mystified by his magic tricks. We'll remember him at the craps table — or with a racing form in his hand, on the golf course, or crouched over the pool table. In early days, he would have had a beer in his hand and a cigarette hanging from his mouth. In later years he shed both those habits, accomplishments of which he was justifiably proud. He loved his children deeply, and his wife even more so. He was quick to say "I love you.” A thoughtful listener, and a good and loyal friend, he will be dearly missed. Ed was predeceased by his parents and all of his siblings: Hank, Jackie, Billy, Dickie, Jimmy, Kathleen, Red, Rosie, Rita and Mary. He leaves his wife of 62 years, Marie Hanley of Hot Springs Village, Arkansas, and his children, Erin Hanley (husband David Weinstein) of Burlington, VT, his son Sean Hanley (wife Christine Hanley) of Acton, MA, and his grandchildren Luke, Charina and Maggie Hanley, along with many nieces and nephews. No public services are planned at this time, and the family will gather for a memorial at a future date. Ed elected to donate his body to scientific research, which is fitting, because, as he said, "This way, I'll still be teaching." Remembrances and condolences may be offered through Hot Springs Funeral Home at: www.hotspringsfh.com

The family of Edward M Hanley created this Life Tributes page to make it easy to share your memories.