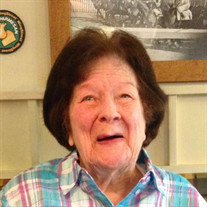 Our mother, Yvonne Davis (Tiny) Baldwin was an amazing woman. Few people ever have or ever will see the world change as she did. In her 104 years on this earth, she rode in horse-drawn buggies, model-T Fords, and open-air biplanes. She watched as Charles Lindbergh flew overhead in the Spirit of St. Louis. She lived through a rattlesnake bite, the death of her mother when she was 10 years old, the Great Depression, and World War II. Yvonne Davis was born on September 18, 1914, in Siddell, Arkansas to Nora Bertha Miller Davis and Neubern William Murphy Davis along with siblings Victor, Violet, Fern, Evelyn, Iwana, and two baby brothers. First cousin Gene Pearson Green was like a sister to her. Her beloved Papa nicknamed her Tiny Girl as an infant and since then she has been known as Tiny. Tiny was so smart with an amazing memory for names and dates going back to her earliest childhood. She skipped 5th grade and graduated from high school at the age of 16. She worked at Sterling Stores in Benton and Hot Springs for 16 years from graduation until marriage, acting as manager but without the title. Tiny was married for 66 years to Harold Woodroe Baldwin from May 29, 1947, until his death in 2013. She is survived by her three daughters, Annette Baldwin Windham (Robert), Kay Sammons (Johnny), and Jane Nora Baldwin. She has five grandchildren, Britt Windham, Jennifer Windham Russell, Shannon Sammons Fields, Joey Sammons, and Kaysi Sammons Jacks. She has nine great-grandchildren, Alexa, Abby, Baily, Gavin, Jacob, Hunter, Nathan, Kaylee, and Emma and two nieces, Carolyn Jones and Patsy Pennington. Pallbearers are Rick Fields, Terry Jacks, Paul Jones, Eric Russell, Joey Sammons, and Calvin Scott. Honorary pallbearer is Don Pennington. Visitation will be on Friday from 5 to 7 p.m. at the Hot Springs Funeral Home. The service will be on Saturday at 11 a.m. at Park Place Baptist Church. Tiny loved the Lord and taught her children that He is the most important thing in their lives. We are happy that she is in heaven with Jesus and all the many loved ones who have gone before her, but we will miss her so very, very much. We love you, Momma!

Our mother, Yvonne Davis (Tiny) Baldwin was an amazing woman. Few people ever have or ever will see the world change as she did. In her 104 years on this earth, she rode in horse-drawn buggies, model-T Fords, and open-air biplanes. She watched... View Obituary & Service Information

The family of Yvonne Davis Baldwin created this Life Tributes page to make it easy to share your memories.

Our mother, Yvonne Davis (Tiny) Baldwin was an amazing woman....