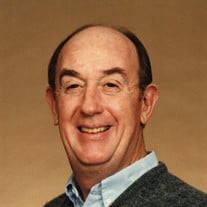 Joe was born Wynant Bennett Glaeser in Bergenfield, New Jersey, on April 26, 1932, to William and Grace Glaeser. He passed away, Tuesday, July 24, 2018. He received his life-long nick name, “Joe,” an allusion to baseball great Joe DiMaggio, early in life when he showed great ability for the sport. He had two older siblings, Harry and Marilyn. He graduated Bladensburg, Maryland High School in 1950, and in 1952, joined the Army and was sent to Japan with the Army Security Agency. SSG Joe Glaeser was discharged in 1960 and returned to Japan with the Federal Government to perform the same mission as a civilian. This is where he met his future wife, First Lieutenant Lillian Lavonna, “Mickey” Tanner of the U.S. Army Medical Services Corps. They both returned to the United States, settling down near Fort Meade, Maryland and were married on June 14, 1962. On June 3rd, 1963, daughter, Erica Lynn was born, followed by son, Joseph Bennett on May 11th, 1965. Joe retired from the Federal Government in 1979 and the family relocated to Hot Springs, to be closer to Mickey’s family. Joe’s 5 grandchildren were born between 1982 and 1997. Mickey passed away in June 2010. He is survived by his children; daughter, Erica Lynn Jones; son, Joseph Bennett Glaeser; grandchildren; Randall Eric (and wife Samantha) Glaeser, Grace Jones, Ellis Jones, Lillian Glaeser, Harrison Glaeser; great grandchildren, Lily Schwaesdall, Hendrix Jones, Gavin Jones and many cousins. Services will be held 2:00 P.M. Friday, July 27, 2018 at Hot Springs Funeral Home Chapel with Jason Clenney officiating. He will have full military honors. Visitation will be 12 noon until service time on Friday.

The family of Wynant "Joe" Glaeser created this Life Tributes page to make it easy to share your memories.