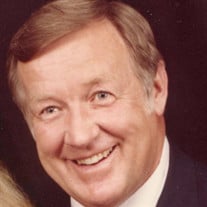 Wayne Lucky, 82, of Hot Springs passed away Monday December 26, 2016. He was born July 27, 1934 in Heidenheimer, TX to the late William and Mary Lucky. He is preceded in death by his parents; one brother, Bill Lucky; father-in-law & mother-in-law, Lester & Emma Pate and brother-in-law & sister-in-law, Jack & Esther Pate. Wayne was a Christian man and a member of Central Baptist Church where he served as a Deacon. He was a United States Air Force Veteran. He was the Rotary Club President in Houston, TX and was on the Board of Directors at the YMCA where he was the racquet ball champion. He played football and graduated from Baylor University, which led him into becoming a coach and teacher in Galena Park, TX. He went to Hillsboro, TX where he became the Athletic Director and Head Football Coach. Wayne went back to Galena Park, TX where he ended his career as the High School Principal, where he was elected the Outstanding Administrator of the year. He enjoyed retirement in Hot Springs in his little cabin on the lake. Wayne loved to play tennis with family and friends. He was a wonderful husband, father, grandfather and great grandfather who always had a smile for everyone. Survivors include his loving wife of 62 years, Sue Lucky; one son, Donald (Gretchen) W. Lucky Jr.; one daughter, Lynn (Mike) Mulloy; sister-in-law, Pat Lucky; his grandchildren, D.W. Lucky III, Erika (Curt) Binger, Mason Mulloy, and Lauren Mulloy; great grandchildren, Bailey, Brody and Malaina; nephews, Bob, Luke and Jack; nieces, Lee Ann and Loubeth. Services will be Saturday December 31st at 11:00 AM at Central Baptist Church with Reverend Tim Hale and Dr. Leroy Kemp officiating. Pallbearers include Jim Geurin, Ted Carrithers, Tom Vandegrift, D.W. Lucky and Mason Mulloy. Honorary pallbearers are the men of Central Baptist Church. There will be a private burial held for the family at Oak Ridge Cemetery in Malvern. The family would like to thank the staff of National Park Medical Center and Dr. Mark Lefler. Memorials may be made to Central Baptist Church or the charity of your choice.

Wayne Lucky, 82, of Hot Springs passed away Monday December 26, 2016. He was born July 27, 1934 in Heidenheimer, TX to the late William and Mary Lucky. He is preceded in death by his parents; one brother, Bill Lucky; father-in-law & mother-in-law,... View Obituary & Service Information

The family of Wayne Lucky created this Life Tributes page to make it easy to share your memories.