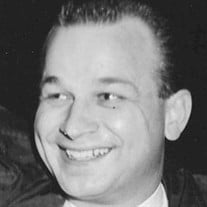 Walker Flake [Mack] Abrams died on Friday, September 25th, 2020. Walker passed away peacefully under the care of Arkansas Hospice. He had been a full-time resident of the Garrett Woods Assisted Living facility since July, 2019. Walker F. Abrams was preceded in death by his sister, Betty Rose [Abrams] Pointer, 1930--1968; his father, Walker M. Abrams, 1900--1972; his mother, Captiola Pearl [Merriott] Abrams, 1911—2010; and his sister, Harriett [Abrams] Newton. Walker is survived by his companion of many years, Shirlease Stephens. He is also survived by a son, Randy W. Abrams; a daughter, Rhonda J. Hoover; a sister, Nancy [Abrams] Dibler; as well as his sister Dorothy [Abrams] Longnecker; a brother, Melvin Abrams; in addition to numerous grandchildren, nieces, and nephews. Walker F. Abrams was a native Oklahoman, who joined the Navy in 1948 and served at the St. Albans Naval Hospital in Queens, New York, as an X-ray Technician, and subsequently on the USS Wright, a Light Aircraft Carrier operating in the Mediterranean Sea. After a tour aboard the Wright he worked at the Cedars of Lebanon Hospital in the Hollywood, California area. Walker returned to Oklahoma and accepted a position as Assistant Administrator and Financial Manager of the Stillwater Municipal Hospital in Stillwater, Oklahoma. Thereafter, he worked as a hospital administrator in Keosauqua, IA, Sac City, IA, and Grants Pass, OR. In the 1980s, Walker was the owner/operator of the Bavarian House German Restaurant in Tigard, Oregon. During his years on the west coast, he operated Abrams & Associates Insurance, working well into his 70s. He will be remembered by the Iowan Jaycees for his election to the National Jaycee office of Chaplain in the early 1960s. Walker participated in the Big Brothers program while living in Portland, OR. Walker Abrams travelled the world while serving in the Navy; now he has come home to rest. Interment will be at the VA Cemetery in Little Rock, Arkansas.

Walker Flake [Mack] Abrams died on Friday, September 25th, 2020. Walker passed away peacefully under the care of Arkansas Hospice. He had been a full-time resident of the Garrett Woods Assisted Living facility since July, 2019. Walker F.... View Obituary & Service Information

The family of Walker Flake (Mack) Abrams created this Life Tributes page to make it easy to share your memories.