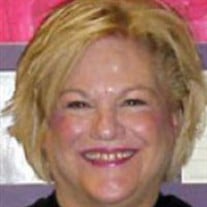 The Honorable Vicki Shaw Cook, beloved wife, devoted mother and grandmother, and faithful public servant, succumbed to illness on the morning of December 18, 2020. Born in Albuquerque, New Mexico, to Thomas Wilton “T.W.” Shaw and Verda Emogene Shaw, Vicki will be lovingly remembered and missed by her husband of 51 years, Ken; two children and their spouses Drew and Callie, Kate and Tom; her granddaughter Maggie; siblings Anthony Shaw and Sydney Tregembo; many nieces and nephews; friends and her beloved courthouse extended family. As a curious, intelligent young woman, Vicki excelled in most everything she committed herself to from cheerleading and scholastic activities in High School. Vicki attended the Oklahoma State University, where she made several life-long friends that she remained in touch with for the rest of her life. A fluent and enthusiastic student of French, she studied abroad at McGill University in Montreal. Most significant, during her time at OSU she met her husband and soulmate Dr. Kenneth Cook. They were married on June 21, 1969 in Albuquerque. That marriage lasted 51 years—the rest of her life. Best friends, they never stopped taking an interest in one-another and enjoyed each-other’s company until the end. Vicki and Ken moved to Hot Springs, Arkansas in 1973 when Ken got a job with the newly founded Garland County Community College. They came to love both the people of the town and the surrounding Ouachita landscape. Their two children, Andrew Shaw Cook and Kate Cook, were born soon after. After teaching kindergarten and English as a Second Language for a few years, Vicki decided she could help children even more with a law degree. When Drew and Kate were 5 and 3 years old respectively she began law school at the University of Arkansas at Little Rock, commuting at night. While she was in class and forever after, Ken assumed responsibility cooking and cleaning and picking up the kids from after school activities. This spirit of teamwork and shared responsibility was an essential element of their successful marriage. They loved one-another very much, and each wanted the best for the other. Throughout her life, Vicki wanted to help the unfortunate, the unseen, and the downtrodden however she could, and her values fueled her professional interests. As an attorney in private practice, she was recognized for her willingness to provide pro bono representation to people in need. She served as a juvenile public defender, helping young people who could not afford legal services. A trailblazer, Vicki was first appointed and then elected multiple terms to the position of judge for the Eighteenth Circuit East in Garland County. She was the first woman judge in county history. On the bench, she presided over family and juvenile law cases, where she was able to help countless children and families in need. Vicki spent the rest of her professional life in this position, presiding from 1992 to 2015. Vicki was a confirmed Episcopalian and was a member of St. Luke’s Episcopal Church for over forty years. She was active in church life, and it was through St. Luke’s that Vicki became involved in the Hot Springs Music Festival, ultimately serving on the board. In retirement, Vicki served several organizations, including Planned Parenthood, The Ouachita Children’s Center, and the Single Parent Scholarship Fund of Garland County. Vicki welcomed Kate’s and Drew’s spouses—Tom Donohue and Callie Smith, respectively—with open arms and took enormous pleasure in doting on Kate’s and Tom’s daughter, Maggie. Vicki loved being a grandmother, just as she loved being a mother. She cared deeply for people and found joy in the joy of others. She enjoyed travel, entertaining, art, music and most of all the company of her many friends. Given the current pandemic conditions, the family will wait until next year to hold an appropriate celebration of her life. Instead of flowers, gifts, or other remembrances, the family asks that mourners donate to CASA, the SPSF of Garland Country, or St. Luke’s ministry to the poor.

The family of Vicki Shaw Cook created this Life Tributes page to make it easy to share your memories.