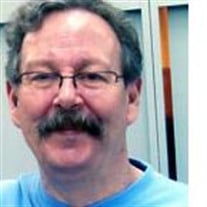 Tom Eudy, 65, of Hot Springs passed away on Tuesday, March 26, 2019. He was born on November 22, 1953 in Huntington, Indiana to the late James and Joy Eudy. Tom was retired from the U.S. Air Force and presently was working as a supervisor for Walgreens in Hot Springs Village. He loved working at Walgreens and his Walgreen family and his very special customers. He was a lifetime member of the VFW Post #2278 and was a former member of the VFW Honor Guard. Tom was of the Baptist faith. He always enjoyed family night, cooking, playing games and being together. He was always ready to plan a road trip with his sisters and he loved to go and be a part of their lives. One of his favorite places was Petti Jean Mountain. Tom loved supporting King Racing. He put in many long and hard hours helping get a race ready and he loved the excitement of the race. Tom was not a complainer, he took what life handed him like a man and made the best of it. Survivors include his wife, Alta Eudy of Hot Springs, one son, Alex Eudy of Texas, one step-son, Doug (Mandy) Ault of Hot Springs, two step-daughters, Shelley (David) Bates of Jessieville and Jamie (Brandon) Lavender of Hot Springs, his mother-in-law, Murlean Graves of Hot Springs, four sisters, Pam Cutler, Rhonda (Scot) King, Sharon Ridgeway and Angela (Micah) Lambert, seven step-grandchildren, Allisha Bates, John Bates Dapple Ault, Paden Ault, Rachel Ault, Faith Lavender and Gage Lavender, and nephews, James King, Scotty King, Chris Williams, Christopher Williams, Jerry Jones, Gary Jones and Blaine Lambert and one niece, Amber Riling. Memorial Services will be Monday 3:00 P.M. in the Hot Springs Funeral Home Chapel with the eulogy by Tim Ragsdale. Honorary pallbearers are Scot King, Chris Williams, Christopher Williams, James King, Scotty King, Micah Lambert, Jerry Jones, Gary Jones, Tom Erwin, Lou Hollingsworth, Jim Shelor, Kevin Shelor, the Fountian Lake Class of 1972 and Blaine Lambert. Military Honors will be by the Jacksonville Air Force Base Honor Guard. Tom will be missed by all who knew him.

Tom Eudy, 65, of Hot Springs passed away on Tuesday, March 26, 2019. He was born on November 22, 1953 in Huntington, Indiana to the late James and Joy Eudy. Tom was retired from the U.S. Air Force and presently was working as a supervisor for... View Obituary & Service Information

The family of Tom Eudy created this Life Tributes page to make it easy to share your memories.