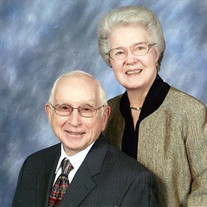 Samuel T. (Bill) Brasher, 94, of Hot Springs, passed away peacefully on Friday evening, August 4, 2017, with family present. He is now in heaven with our Heavenly Father, face-to-face with the Lord Jesus Christ, and happily visiting with family and friends, who were also saved by believing in the Lord Jesus Christ. Bill was born on March 8, 1923, in El Dorado, Arkansas, not long after WWI, to a hardworking father and loving mother. He had one sister. The family soon moved to the oilfield area of East Texas, where he remembered that they lived in a tent with wood floors for some years. Bill was in the U. S. Navy for four years in WWII and drove a large LST ship. He remembered well the captain telling him which way to steer the ship. After graduating from college, Bill ended up in Houston and was eventually regional sales manager for Marsh Instruments and then vice president for Control Specialties. He retired at 60 and then became a "professional retiree," a position that he thoroughly enjoyed for the last 34 years. Bill met his wife, sweetheart, and soul mate, Elizabeth Ann Brasher, during his years in Houston. Since 1986 they have had a wonderful retirement in Hot Springs and attended the First Baptist Church. A great sense of humor and genuine interest in other people were qualities often noticed by folks Bill met. He loved his wife dearly and tried to be a good Christian and to do things that were pleasing to the Lord. Bill will be greatly missed by those who loved him. Bill is survived by his wife, two daughters and two sons in Houston, Dallas, and San Diego, three grandchildren, and a special group of relatives in Fayetteville, Arkansas. Visitation will be from 6-8 p.m. Thursday, Aug. 10, 2017, at the Hot Springs Funeral Home. Funeral services will be at 10 a.m. Friday, Aug. 11, 2017, at the Hot Springs Funeral Home chapel. All that knew him, even just slightly, are invited to attend. Interment will be at 10 a.m. Monday, Aug 14, 2017, in the Wheat family plot at Oakland Cemetery in Monticello, Arkansas. Bill was a very good man, a wonderful husband, father, and grandfather, and a blessing to all those who came in contact with him.

Samuel T. (Bill) Brasher, 94, of Hot Springs, passed away peacefully on Friday evening, August 4, 2017, with family present. He is now in heaven with our Heavenly Father, face-to-face with the Lord Jesus Christ, and happily visiting with family... View Obituary & Service Information

The family of Samuel T. Brasher created this Life Tributes page to make it easy to share your memories.