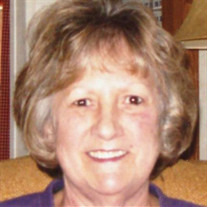 Ruth “Rudy” Toliver, 67, passed away on Tuesday, May 31, 2016. She was born in Nathan, Arkansas on November 4, 1948 to the late Marvin and Freda Jo Smith. She was of the Baptist faith, she graduated from Arkansas High School in Texarkana, Arkansas in 1966 and she was former manager of an auto parts store in Nashville, Arkansas. She was predeceased by her parents, her husband, Larry Smith and one brother, Joe Paul Smith. Survivors include her daughter, Toni (Mike) Seavers of Nashville, Arkansas, step-son Todd Smith of Boston, one brother, Buddy (Brenda) Smith of Texarkana, Arkansas, one sister, Louise Toliver of Nashville, Arkansas, one grandchild, Braden Seavers, nieces, Brandi (Calen) Isbell, great niece, Madison Isbell, nephew, Michael (Kristy) Toliver and Brian Smith, and a great nephew, Tyler Toliver. As per her wishes, she will be cremated and there will be no services.

The family of Ruth "Rudy" Toliver created this Life Tributes page to make it easy to share your memories.