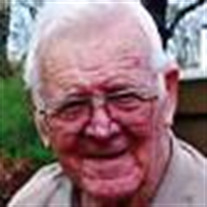 Roy Leonard Perry, 99, formerly of Hot Springs was taken home by the Angels Saturday evening, November 4, 2017 in North Little Rock just in time to sing Amazing Grace for Sundays morning’s service in Heaven. He was born on Easter Sunday, March 30, 1918 to James and Effie Perry of Keller, Texas. Roy served his country for 5 years during World War II. He fought in many battles including Normandy and the Battle of the Bulge where he was awarded a bronze star. He also earned other medals in his service including EAME Campaign Medal and American Defense Medal. He retired from the Corp of Engineers. His most incredible accomplishment was the love he gave his family, his enduring hugs, and his unending faith that he loved to share. He was predeceased by his wife, Geneva C. (Trantham) Perry, three brothers, Harvey, Millard and Bob Perry and four sisters, Minnie Faye Sharp, Ruby McDonald, Grace Slaight and Norma Anderson. Survivors include one son, Doug Beard (Susan) of Wagoner, Oklahoma; one daughter, Kathy Newberry of North Little Rock, Arkansas; grandchildren, Brian Newberry (Sara) of Benton, Kristy Roy (Rob) of Edmond, Oklahoma, Donya Alexander (Steve) of North Little Rock; beloved great grandchildren, Ty and Hunter Newberry, Carson and Avery Roy, Dylan, Blake and Chase Alexander; a host of family and friends; special caregiver, Felechia; his sisters-in-law, friends from meals on wheels, and anyone who truly knew him…loved him. Until we meet again to get “Just one more Hug”, we’ll miss you forever Gramps. A special thanks to Sherwood Nursing Home. Memorial services will be 10:00 A.M. Monday in the Arkansas State Veterans Cemetery in Sherwood, Arkansas. Military honors will be by the U.S. Army and the VFW Post #2278 Honor Guard.

The family of Roy Leonard Perry created this Life Tributes page to make it easy to share your memories.