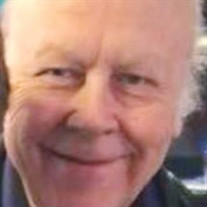 Robert L. Simpson made his debut on May 8, 1952 in Pine Bluff, Arkansas and took a final bow in the early morning hours of May 23, 2016. He is survived by his loving aunts Betty & Virginia Rodgers and a multitude of cousins in the Rison and Mena areas. The beloved only child of Leonard and Helen Simpson, Robert graduated from Bearden High School where his dad served as school superintendent. He then attended Henderson State University where he received a BA and MSE in Theatre Tech. Robert was destined to have theatre as a major part of the fabric of his life. He moved to Hot Springs in the early 1970’s when federal funding for the arts was a major factor in providing employment for all types of artistic development. He served for several years as the technical director of the Hot Springs Community Players where he was set, light and sound designer as well as assistant director and stage manager for over 25 productions. Hot Springs then became the home of the outdoor drama production at the Mid-America Amphitheatre. Robert served as the artistic manager/director of the Hernando de Soto musical for a number of seasons. In 1978, Kerry Lockwood Owen and Robert met while working on The Rainmaker for the Community Players. Their bond continued for the rest of his life, working together on community and high school theatre at Lakeside and Hot Springs High for over 30 shows. But in 1983 federal funding for the arts was slashed and Robert’s job was eliminated. Enter Stage Left: Kerry spoke to her husband, Ray Owen, Jr., master problem solver, who provided a “temporary” solution; he offered Robert a job at his law office for 3 months. Three months turned into 34 years of work with his non-genetic second family, thus beginning Act II of Robert’s life. Through his association with Ray Owen and Associates, Robert forged another type of business life working on water and sewer improvement districts with Ray and spending much time in the Garland County Courthouse where he had his ‘non-theatre’ family— everyone there had experienced our Robert— bossy, demanding, witty, charming and so very dear. He loved the Owen office staff throughout the decades and always complained that he had too many mothers telling him what to do. Drama never left that office! Our “Little Robert” was always amazing and a grand uncle to his extended adopted family. The spotlight of our love and stories will shine on his empty office every day. Act III of Robert’s life was his longtime association as the heart of the Hot Springs Pocket Community Theatre. Gene and Margaret Forsythe, long term board members and representatives of the Pocket Theatre wrote: Robert began his 20 year plus association with the Pocket Theatre, first as an actor, then helping to select New York quality plays and securing the rights from the publisher to bring them to Hot Springs. After the auditions were held and rehearsals were underway, he changed hats and became the assistant director. We affectionately called him the “Man in Black” as he quietly changed props between scenes on the darkened stage. Having a college degree in Theatre, he often helped coach fledging actors with their lines as well as character development. As opening night loomed he moved backstage as stage manager. He always had a script nearby to make sure no one was late for an entrance. If an actor called in sick, it was Robert, being most familiar with the script, the director asked to fill in. He leaves a legacy of well over one hundred productions to the theatre-going public. As the final curtain rings down, the Pocket Theatre is dark and the actors have paused for a moment saying, “break a leg” to Robert as he heads to “Another Opening, Another Show." Curtain Call --Visitation will be at Hot Springs Funeral Home on Thursday, May 26 from 5:00 pm to 7:00 pm. Graveside services will be held on Friday, May 27 at the Pleasant Ridge Cemetery near Rison, Arkansas. In lieu of flowers, donations may be made to The Pocket Theatre, Inc., PO Box 20577, Hot Springs, AR, 71903-0577 or to the Pleasant Ridge Cemetery Fund c/o Sewilda Jacks, 4970 Rodgers Rd East, Rison, AR 71665.

Robert L. Simpson made his debut on May 8, 1952 in Pine Bluff, Arkansas and took a final bow in the early morning hours of May 23, 2016. He is survived by his loving aunts Betty & Virginia Rodgers and a multitude of cousins in the Rison and... View Obituary & Service Information

The family of Robert L. Simpson created this Life Tributes page to make it easy to share your memories.