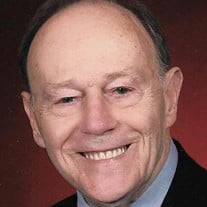 Robert "Bob" Rosenthal, age 85, of Hot Springs Village, AR passed away on Saturday, June 3, 2017. He was born to the late Harold Rosenthal and Betty Rebman Rosenthal on August 13, 1931. Bob is survived by his wife Judith, four sons, Michael (Peggy) Rosenthal, St Louis, Mark (Rhonda) Rosenthal, Sherwood, OR, Curtis (Sharon) Rosenthal, St. Louis, Bradley Rosenthal, Cape Girardeau, MO; one sister, Sharon Brewen of Nevada; eight grandchildren and five great grandchildren. Bob attended Gratiot Grammar School and graduated from Southwest High School, St Louis in 1949. He attended Southeast Missouri State College and St. Louis University. Bob joined the US Air Force during the Korean War. He served 2 years in Japan where he played baseball for the 5th Air Force. He was Scoutmaster for Air Force dependent children and took them on a climb of Mt. Fuji as part of a two week camp at the base of Mt Fuji. After military service he lived in Cape Girardeau. His four sons, Michael, Mark, Curt and Bradley were born in Cape Girardeau. He was active in coaching and leadership in Little League Baseball in Cape Girardeau and Carbondale, IL. He married Judith in 1965 in Scott City, MO. They moved to Carbondale, where he began a long career with Diebold, Inc. in sales and management. As he was promoted within Diebold they lived in Birmingham, Seattle and Leawood, KS. Bob loved to hike in the mountains of Washington with his favorite being Mt Rainier. Some of this favorite hobbies were enjoying K.U Basketball and golf. After 17 years in Leawood, Bob and Judy retired to Hot Springs Village. As they were transitioning to the Village Bob was diagnosed with Multiple Myeloma. After a stem cell transplant at the Myeloma Institute in Little Rock Bob was put into remission and was able to enjoy a full active life. Bob and Judy joined the Presbyterian Kirk in the Pines, Hot Springs Village in 1996 where Bob volunteered on various committees and was Clerk of Session for 9 years. Memorial Service will be held at the Presbyterian Kirk in the Pines, 275 Asturias Drive, Hot Springs Village, AR at 1 pm Saturday June 17th with Military Honors. Memorial contributions may be made to Presbyterian Kirk in the Pines, 275 Asturias Drive, Hot Springs Village, AR 71909, UAMS Myeloma Institute, 4301 W. Markham St, Little Rock, AR 72205 or Arkansas Hospice Hot Springs, 14 Parkstone Cr. N. Little Rock, AR 72116.

The family of Robert Aaron Rosenthal created this Life Tributes page to make it easy to share your memories.