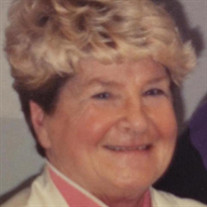 Phyllis Jones, 94, of Hot Springs passed away Friday, January 7, 2021. She was born May, 4, 1927 in Halifax, Canada. She was predeceased by her parents; daughter, Gayle Morales; brothers, Leo Steeves, Raymond Steeves and Gerald Steeves. Phyllis led a long life that took her many places. Her military career began when she enlisted in the Canadian Army at 14 (having led the Army to believe she was 16), and continued when she married her husband, Loren, who was in the U.S. Army. As a result, she, her husband and two children moved a lot, living on bases in California, New York, Massachusetts, Maine, Washington, Georgia, and Texas, as well as three years in Germany. Later in life, Phyllis lived in California, Idaho, and for the last 35 years, in Arkansas. She loved dancing from an early age and had many jobs over her lifetime, including owning and cooking at The Rascals, a small restaurant outside Hot Springs Village. She especially enjoyed her family and friends, her dogs, and her years living on Lake Hamilton. Survivors include her son, Loren (Claudia) Jones; grandchildren, Wendy Morales, Nathan Jones and several great grandchildren. Services will be private.

The family of Phyllis Jones created this Life Tributes page to make it easy to share your memories.