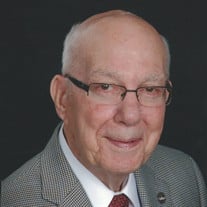 Paul Noble Dahl, 86, of Hot Springs died peacefully in his home on Monday, June 11, 2018. Paul was born July 9, 1931 in Cement, Oklahoma to the late John and Grace Lusk Dahl. He is survived by his two daughters, Debra Dahl of Hot Springs and Denise Seiz (Jon) of Louisville, KY. He is also survived by four grandchildren that adored their “Bumpa”: Kristin Nalley of Oxford, MS, Alyson Seiz Johnson (Trevor) of Cincinnati, OH, Kathryn Nalley of Philadelphia, PA and Austin Seiz of Louisville, KY. The newest light of his life was his great granddaughter, Tyler Grace “Tilly” Johnson. Paul was pre-deceased by his wife of 61 years, Mary Jo Gann Dahl, and his brothers, Odis Dahl and Bill Dahl. Paul attended Oklahoma A & M (OSU) and graduated in 1953 with a Bachelor of Science degree in Forestry. Upon graduation he joined the U.S. Army and on his first leave he and Mary Jo married in Ninnekah, OK. Paul completed his service in the Army in 1955 and began his 40 year career in the forestry and timber industry with Dierks Forests, Inc. in Battiest, OK. He remained with the company upon its acquisition by Weyerhaeuser in 1969. His career spanned timberland and materials research and numerous plant management assignments in Arkansas, Oklahoma and Mississippi. He retired from Weyerhaeuser in 1989 but continued to work as a consultant in forest products for another six years. He was an Arkansas State Registered Forester and was recognized over the years for his dedication and contribution to the industry. In 1991 he was awarded the Outstanding Forester Award by the Oklahoma Society of American Forestry and the Heritage Forester Award from the Forest Heritage Center. In 2001, he was selected as a Fellow of the Society of American Foresters and in 2006 he was inducted to the Arkansas Foresters Hall of Fame. Paul was a man of deep faith and tirelessly served his churches including Grand Avenue United Methodist Church and, later, First United Methodist Church of Hot Springs. He was a lifelong usher, served on numerous boards and committees, and taught youth Sunday School for over 15 years. In 1995 he began to volunteer at The Caring Place of Hot Springs, a respite care program for the families and caregivers of those with Alzheimer’s and dementia. His desire to serve turned into a passion that blessed clients of The Caring Place for over 20 years. Paul will always be remembered for his generosity and selflessness, faith, loyalty, storytelling and love of family and friends. A celebration of Paul’s life will be held at First United Methodist Church, 1100 Central Avenue, 11:00 a.m., Friday, June 15, David Wilson and David Mosley officiating. A reception will follow the service at the church Family Life Center. The family would like to offer their heartfelt appreciation to Hospice of Central Arkansas for its excellent care and a special thank you to neighbor and friend, John Minginas, for his unwavering support and care for Paul over the years. In lieu of flowers, donations may be made to The Caring Place of Hot Springs, 101 Quapaw Avenue, Hot Springs, AR 71901.

Paul Noble Dahl, 86, of Hot Springs died peacefully in his home on Monday, June 11, 2018. Paul was born July 9, 1931 in Cement, Oklahoma to the late John and Grace Lusk Dahl. He is survived by his two daughters, Debra Dahl of Hot Springs and... View Obituary & Service Information

The family of Paul N. Dahl created this Life Tributes page to make it easy to share your memories.