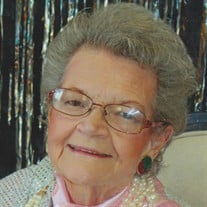 Patricia (Pat) Ann Reed, 88, was born July 19, 1931, in Erie County, Pa., and died February 21 2020, in Malvern AR. She was the daughter of Aubrey E. and Clara S. Reynolds. Pat married John Reed on Jan. 1, 1948, at St. Tresa Catholic Church, in Union City, Pa and moved to Hot Springs in the early 50s. She was a member of St. John's Catholic Church. Pat Reed worked in the food and beverage industry for most of her life. Pat’s first job after arriving in Hot Springs was as a soda jerk at Purity Ice Cream. She started her career as a waitress working for Phillips Drive In located on Central Avenue. She was a former manager of the Avanelle Restaurant and former food and beverage manager of the Velda Rose Towers Restaurant which was located on Park Avenue, working there for a number of years. She also owned and operated El Tacos Mexican Restaurant. For more than 30 years, Pat dedicated her time to supporting Small Group Work Therapy Inc., working as a volunteer, board member and president. Mrs. Reed was a recipient of the Hot Springs Hospitality Association's President's Award, presented annually to a member for outstanding service to the Annual Convention, which is held each year in Hot Springs. The award is traditionally given to a supplier firm, but the group deviated from that practice because of Mrs. Reed's many years of service. Pat assisted the convention by setting up and dressing the registration desk at the convention, while serving sandwiches and coffee to early arrivals that came to help in the preparation efforts. She was also cited for her efforts in supplying food and supplies for the Association's Annual Early Bird Party, which is designed to bring delegates in one day early. Since the inception of Early Bird Party, registration for the Annual Convention and Trade Show has increased significantly. Mrs. Reed also served five terms as president of Garland County Hospitality Association. Pat was in the advertisement business, owning and operating Travel Host Magazine, which was distributed to hotels and restaurants in Hot Springs for their guests. She was active in community affairs with her volunteer services. She worked in public relations with Witness Productions. The Witness is a passion play located in Hot Springs, Arkansas, which portrays the life of Jesus with music. Patricia is survived by two daughters, Darlene Munday and her husband, John, of Hot Springs and Pamela Hendren and her husband, Charlie, of North Carolina. Pat was preceded in death by her husband, John, who died in 2010; son Bruce Reed, who died in 1994; and a sister, Bonnie Lee Reynolds, who died in 1997. Survivors also include five grandchildren; Trace Munday and wife, Lona of North Little Rock, Temple Rose Ridenour and husband Eric, Cindy Hendren Miller and husband, Nathan of Newburgh, Indiana, Shane Hendren and wife, Jennifer of Wilmington, North Carolina, and Rebecca Jo Adams and husband, Doug, of Joplin, Missouri. Pat also has nine great-grandchildren, Abigail Hendren, Davis Hendren, Margaret Adams Herre and husband Tim of Kansas, Lyndsey Adams-Hanna and wife, Jennifer of Dallas, Avea Miller, David Miller, Ocean Ridenour and Skylar Ridenour. Patricia is survived by her brother, Robert Edward Reynolds and his wife, Deborah, of Hot Springs. They have five children, Jennifer Lee White, Joseph Wayne White, Stephen Andrew Reynolds, Joshua Edward Reynolds and Shane Robert Reynolds and his wife Yoli. Shane has three children, Elizabeth, Matthew and Sarah. Patricia's brother, Aubrey Wilson Reynolds and his wife, Billie Ann, of Springdale AR. They have two children, Matthew Reynolds wife Julie Annette and David Reynolds and his wife Shalon of Owasso, OK. Patricia's sister, Martha Henning and husband, Peter of Hot Springs. Martha has four children, daughter, Renee Marie Lewis, of Denver, Colo., and her children, Danielle Marie Hale, of Rockport, Texas, and Gitana Leans Purma, died in March 2009; daughter, Crystal Harvey and husband, Floyd, of Hot Springs, they have three children, Gabriel Elizabeth, Stratton Aubrey and Destiny Tyne; son, Scott Christopher Henning and wife Debra of Alabama and son, Hunt Theodore of Alabama. Arrangements are by Hot Springs Funeral Home, visitation will be 10-11 a.m. Friday with services at 11 a.m.; conducted by Rev. Aubrey Reynolds. Burial will be in Hollywood Cemetery. We would especially like to thanks the Arbor Oaks Health Care & Rehabilitation Center and Hospice Care Givers of Malvern, Arkansas.

The family of Patricia Ann Reed created this Life Tributes page to make it easy to share your memories.