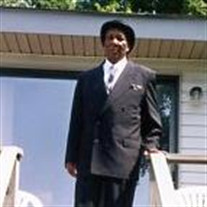 Ozie Jackson &#8220;I have fought a good fight, I have finished my course, I kept the faith.&#8221; II Timothy 4:7 Mr. Ozie Jackson was born July 30, 1923 in Rosston, Arkansas to the late Lydia Gulley and Earlie Jackson. Ozie joined the... View Obituary & Service Information

The family of Ozie Jackson created this Life Tributes page to make it easy to share your memories.

“I have fought a good fight, I have finished my...