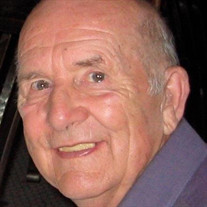 Oscar Joseph "Buddy” Gloor was born on October 3, 1930 in Hot Springs, AR and died June 7, 2016 in Hot Springs after a lengthy illness. He was preceded in death by his parents, Oscar and Elsie (Miller) Gloor and his sister, Thresa Gloor. He grew up in Hot Springs, where his father owned Oscar's Bakery in downtown Hot Springs. He graduated from St. Thomas Military Academy in St. Paul MN and then went on to baking school with plans to work for his father. He served in Korea in the U.S. Army during the Korean War. After an early discharge due to his sister Thresa's death in an auto accident he continued to serve in the U.S. Army Reserves. He married Patty Kimbrell in 1953, and together they raised a family. He worked as manager of Oscar's Bakery until its closing in 1972. During those years he was very active in the Hot Springs Jaycees. After the closing of the bakery, he worked as Vice President with Wheeler Printing and served his community as a Justice of the Peace, a member of the Hot Springs City Planning Commission, the Hot Springs Community Players, Parents Without Partners, Lions Club, and the Elks Club. He was also a member of the Knights of Columbus and Veterans of Foreign Wars and was a regular volunteer for the annual Oktoberfest event. One of his favorite community projects was putting out the flags around the city on national observances. He was a faithful member of St. John’s Catholic Church where he often served as an usher. He was also a devoted father to his children and took them out to dinner, to the pool at the Elks Club and on many outings and camping trips even though he was busy with both work and community involvement. After his retirement and the passing of both of his parents, he enjoyed a lot of time with his longtime companion, Betty Parker, at the Elks dances and activities, taking tours, cruises, and memorable videos as well as time taking care of his home on Malvern Road where he loved to work in his garden and yard. After moving to a smaller home in Hot Springs, he continued to serve in the Elks Club and be with friends and family every chance he got. He and Betty worked together as Blue Coat volunteers. He loved to read books and magazines, dance, look through photo albums and travel videos with Betty and his family, and take care of his cat, Burt and the birds in his back yard. He is survived by his son, O.J. Gloor and wife Susan of Harrison; his daughter, Thresa Cook-Arthur of Hot Springs; his daughter, Heather Henry and husband Don of Hot Springs; his son, Storm Gloor and wife Laura of Denver, CO; his daughter, Robin Armitage and husband Jason; his sister, Dolores Heiss and husband Calvin of Hot Springs; his longtime companion, Betty Parker; twenty one grandchildren and ten great grandchildren. He will be lovingly remembered by his family as a man who loved God, his country, his community, and his family very much and constantly gave of himself. The love, smiles, and laughter he always gave so freely will be missed deeply by all who knew him. Visitation will be 5:00 PM Friday June 10th with a Rosary at 6:30 PM at Hot Springs Funeral Home. Service will be 10:00 AM Saturday June 11th at Hot Springs Funeral Home. Burial will follow at Calvary Cemetery with Military Honors. Pallbearers are Bobbie, Seth, Justin and Jordan. Memorials may be made to St. John’s Catholic Church or St. Mary’s Catholic Church.

Oscar Joseph "Buddy&#8221; Gloor was born on October 3, 1930 in Hot Springs, AR and died June 7, 2016 in Hot Springs after a lengthy illness. He was preceded in death by his parents, Oscar and Elsie (Miller) Gloor and his sister, Thresa Gloor. He... View Obituary & Service Information

The family of Oscar "Buddy" Gloor created this Life Tributes page to make it easy to share your memories.