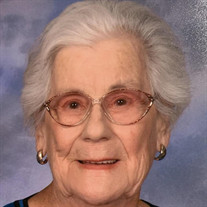 Olive Jean Jensen Donath, age 97, passed away on March 10th, 2021, at her granddaughter’s home in Benton. Olive Jean was born on March 19th, 1923, in Stuttgart, AR, to Henry & Olga Buerkle Jensen. She was preceded in death by her husband of 68 years Lt. Col. Louis R. Donath, her parents, and her infant brother. She is survived by her daughters Jean Ann Donath Dickson (David) of Pearcy, AR, and Gail Donath McKenzie (Dan) of Heber Springs, AR, and by her grandchildren Erika Dickson Loveless (Donald) of Conway, Aaron Dickson (Christine) of Arkadelphia, Alisa Dickson Bynum (Shawn) of Benton, & Kelly McKenzie of Hot Springs. Great grandchildren are Eva, Gabe, and Ethan Bynum, Louis McKenzie, and McKenzie and Madison Loveless. Olive Jean was a member of Prince of Peace Lutheran Church in Hot Springs since 1994 and before retiring to Hot Springs, Olive Jean and Lou were members of Emmanuel Lutheran in Stuttgart, AR. Olive Jean was a confirmed member of Emmanuel Lutheran from 1923 to 1994. Olive Jean graduated from Stuttgart High School in 1941 and after attending college at Hendrix and UCA (then State Teachers College) she worked at the Stuttgart Army Air Corps Base from 1943 to 1945 where she met Lt. Lou Donath. They were married on Sept. 24, 1944. Olive Jean has always been a very active member of her community and involved in her daughters’ lives. She taught children’s Sunday school classes at Emmanuel Lutheran, 11 years with the Girl Scouts as leader and co-leader of two Girl Scout troops, garden club member, Emmanuel Lutheran Circle 4, and always helped with any activities in which her daughters were involved. She liked to crochet and make afghans, was an excellent cook, loved to go camping and boating with family and friends, and had a green thumb when it came to gardening. Olive Jean dearly loved animals and helped any stray animal she happened to encounter, even taking it to the vet if needed. The family pets received a special dogfood/catfood cake on their birthdays. Later in life when she had no pets of her own, the neighbors’ dogs would still gravitate toward her home. Olive Jean, aka Granna, was a wonderful mother and grandmother and will be missed very, very much. Visitation will be held at 12:30 pm on Saturday, March 13th, at the Pavilion in Emmanuel Lutheran Cemetery on West Old England Highway in Stuttgart followed at 1 pm with the funeral service also at the Pavilion. Memorials may be sent to Emmanuel Lutheran Church, 209 S. Grand Ave., Stuttgart, AR 72160; Prince of Peace Lutheran Church, 109 Hobson Ave., Hot Springs, AR 71901; or Museum of the Grand Prairie, 921 E. 4th St., Stuttgart, AR 72160.

Olive Jean Jensen Donath, age 97, passed away on March 10th, 2021, at her granddaughter&#8217;s home in Benton. Olive Jean was born on March 19th, 1923, in Stuttgart, AR, to Henry & Olga Buerkle Jensen. She was preceded in death by her husband... View Obituary & Service Information

The family of Olive Donath created this Life Tributes page to make it easy to share your memories.