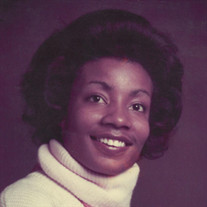 Myra Ann Norman Arrival: January 26, 1956 Departure: January 23, 2018 The family of Bobby B. Norman Sr., solemnly announces the recent death their daughter, Myra Ann Norman of Bryant and Hot Springs, AR. Myra departed after a brief illness shortly before 2:00 p.m. Tuesday afternoon at Baptist Hospital in Little Rock, AR. Myra Ann Norman, the eldest daughter of Bobby Ben Norman Sr. and Patsy Moore Norman was born January 26, 1956 in Chicago, IL. She started, attended primary and secondary schools in Chicago and Battle Creek, MI. Myra received her B.A. (Degree in Marketing) from the University of Western Michigan, at Kalamazoo, MI. Miss Norman was a registered and licensed insurance agent and a long-time resident of Atlanta prior to moving to Arkansas in recent years. She was active and well-known for her participation in and at the Normans, Burns, Branches and Johnson’s family reunions. After the death of her father, Bobby B. Norman Sr., she became her family's representative at such events. Survivors and immediate family include her mother, Patsy M. Norman; brothers, Ronald (Ronnie) Javier, Bobby (Bob) Eskridge, Bobby Norman Jr. and Laurian (Kenny) Norman; sisters, Rosie Norman and Mary Norman; nieces, Dimika (Nikki) Smith, Consuela Javier and Ariel Blackbird; great nephews and nieces, Darius Smith, Kennedy Smith and Gabriel Freeman; and a large number and host of close and dear relatives from the many branches of the Norman (paternal) and Moore (maternal) families. In with respecting the wishes of the family; there will be no funeral service but rather a memorial service to be held at a future date. Time and location to be announced.

The family of Myra Ann Norman created this Life Tributes page to make it easy to share your memories.