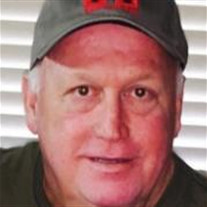 Michael Bryan Harris, Sr. “The Painter” 61 of Royal, Arkansas gained his angel wings on January 8, 2020. He was born on Friday, June 13th, 1958 in Iowa City, Iowa to the late Buddy and Betty Harris. He was born into the carnival business, a business which granted him the luxury to see so much of our great United States. His family put down roots in the big town of Royal, AR in 1971. He attended Southwest School before transferring to Lake Hamilton. He met the love of his life, Susan Sorter and they were married on March 19, 1978. They were married nearly 42 years and enjoyed fishing, hunting, and raising their sweet family together. He was the owner of Mike Harris Painting, a business that he and his wife started in the late 80’s and his son will continue to operate. The legacy of Mike Harris Painting will continue. He was a very proud Pawpaw and loved his sweet grandbabies with all of his heart. He was predeceased by his parents and one baby brother, David Wayne Harris. Survivors include his loving wife, Susan Harris, daughter, Natosha Golden (Dennis), son, Michael Harris, Jr.,(Cassie), daughter, Megan Bradshaw (Greg), brother, Jim Harris (Brenda), sister, Kathy Mowery (Charlie) and eight “sweet as pie” grandbabies, Michael Harris III, Millisen Harris, Gage Golden, Ayden Golden, Baylor Bradshaw, Caleb Bradshaw, Presley Bradshaw, Abby Bradshaw, one great grandbaby Lynnon Bradshaw, and best friend and fellow outdoor enthusiast Bill Hudson. Pawpaw Mike also leaves behind his beloved fur babies, as well as a host of family and friends. He never met a stranger and talked to everyone he encountered. A Memorial Service to Celebrate his Life will be Saturday at 3:00 P.M. at the Royal First Baptist Church with Brother George Lynch officiating

The family of Michael Bryan Harris Sr. created this Life Tributes page to make it easy to share your memories.