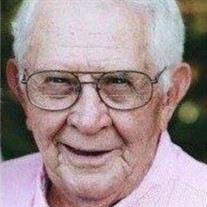 Maylon Spivey, 88, of Hot Springs entered Gods Kingdom on March 25th, 2020. Maylon was born October 5th, 1931 in Louisville, Miss. He was the son of the late Clifford and Velma Fulton Spivey. Maylon attended Glen Allen High School and then enlisted in the Mississippi Army National Guard on 3-1-48 and served as a Field Lineman in the 31st Infantry Division until his honorable discharge on 03-11-50. After serving in the heat of Miss. he decided life had to be better on board a ship and enlisted in the US Navy and served on the USS Mount McKinley as a Teleman 3rd Class during the Korean War and received the National Defense Service Medal, United Nations Service Medal, Korean Service Medal, China Service Medal and Good Conduct Medal. He was honorably discharged on 11-28-55. He moved his family to Hot Springs in 1961 and eventually entered the grocery business working primarily for Piggly Wiggly and eventually became manager of their store on Park Avenue for many years. He was always customer oriented and taught his children the value of a hard days work. He was an avid golfer and frequented many of the local courses with friends and his sons. He also enjoyed his time in the woods with his sons deer hunting and relaxing at home playing cards with his daughter and wife. As an Ole Miss fan he loved needling his Razorback friends during the course of a season. He is survived by his wife Norma June Spivey; daughter Melinda Spivey; sons Mitch, Mike and Steve Spivey, all of Hot Springs, AR; He was blessed with 4 Grandchildren and 5 Step Grandchildren, 7 Great Grandchildren and 12 Step Grandchildren, as well as 2 Great Great Stepchildren. He is also survived by eight siblings, there are three sisters, Mary S. Hudgins of Russellville, AR; Janet (Louie) Melfi of Easton, CT; Pauline (Walter) Rogow of Branford, CT; four brothers, Alton Spivey of Walnut Grove, MS; Mose D. (Elke) Spivey of Bothel, WA; Paul (Connie) Spivey of Gulfport, MS; Joel (Penny) Spivey of Van Cleave, MS. Services will be held 10:00 A.M. Tuesday, April 7, 2020 at Memorial Gardens Cemetery.

The family of Maylon Spivey created this Life Tributes page to make it easy to share your memories.