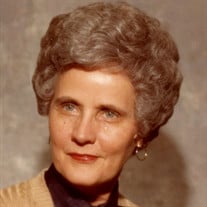 Margaret Farr Stitt, 97, of Hot Springs passed away on Saturday, August 19, 2017. She was born on September 22, 1919 in Hot Springs to Mary E. “Mollie” Roulston Farr and Daniel Jackson Farr. Margaret grew up in the Red Oak community on Lake Hamilton and was of the Methodist faith. Her interests and hobbies were her family, the lake and golf. She could hit the golf ball straight down the fairway with never a slice or hook. After graduating from Lakeside High School in 1938, she attended Business School followed by a career in banking (ABT), insurance and retiring from the City of Hot Springs after 26 years of service. She was the secretary/policewoman under five Chiefs of Police, John Ermey, Joe Crain, Grover Douglas, Marvin Owen and Martin White. She was proud to serve the city and some of the less fortunate patrons of the city jail who called the jail, “Mrs. Stitt’s Hotel” because if they didn’t have a place to sleep or anything to eat, she would put them up in the jail for a night or two. She is predeceased by her parents, her siblings, Harold, Evelyn (Effie), William (Bill), Frank, Richard (Dickey), Adele, Jackie and Jennie and her former husband, Clayton Smith, all of whom she loved dearly. Survivors include two sons, Frankie Smith (Sherry McRae) of Hot Springs, and Richard Smith (Aurelia) of Hartsville, S.C.; a grandson, Ret. Col. Brian Smith of Vass, N.C.; a great granddaughter, Rachell; a great grandson, Conner; nieces and nephews. Graveside services will be Wednesday at 10:00 A.M. in Greenwood Cemetery with Reverend Andrew Gonzalez officiating. Honorary pallbearers are all the former Hot Springs Police Officers she worked with. A special thanks to the Doctors, Nurses and staff of Arkansas Hospice Inpatient. In lieu of flowers, memorials have been designated to the Caring Place.

The family of Margaret Farr Stitt created this Life Tributes page to make it easy to share your memories.

Margaret Farr Stitt, 97, of Hot Springs passed away on Saturday,...