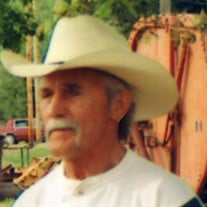 Mannie Fires, 71, of Pearcy, passed away on Tuesday, September 28, 2021. He was born on August 5, 1950 in Dice, Arkansas to the late Earlie Edgar and Cleo Clay Fires. Mannie was a thoroughbred race horse trainer, was a licensed trainer at Oaklawn... View Obituary & Service Information

The family of Mannie Fires created this Life Tributes page to make it easy to share your memories.

Mannie Fires, 71, of Pearcy, passed away on Tuesday, September...