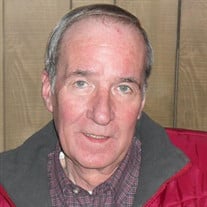 Lindrel “Lin” N. Hogaboom, Jr., age 75, unexpectedly passed away, in Hot Springs on Tuesday, October 16, 2018. Born on April 6, 1943 in Bryan, Texas to Lindrel and Otma Bradley Hogaboom, Lin was raised and educated in Hot Springs, was 1961 graduate of Hot Springs High School, where he played trombone in the Hot Springs Trojan Marching Band. He attended college at Henderson State University and Ouachita Baptist University and served in the United States Air Force and the Arkansas Air National Guard. He owned his own commercial cleaning business, was employed as a supervisor at Hot Springs Rehabilitation Center, worked for years at Pop-N-Pizza and most recently served as Christian Life Center watchman at First United Methodist Church. Lin was an active member in his hometown community. For more than a decade, he served on and was president of, the Hot Springs School District Board of Education. He was also a member of Central Baptist Church, the Sertoma Club, the National Rehabilitation Association, Hot Springs Children’s Home Board and BPOE Elks Lodge #380. He is survived by his daughters, Janette Bales and Kristin Babb, his brother, Jan Hogaboom, his sister, Karen Hogaboom, his grandson, Brady Bales and granddaughters, Karson Babb and Brynna Bales, as well as several nieces, nephews, cousins and dear friends. A Memorial service will be held on Thursday, October 25, 2018 at 10:00 am in the chapel of Hot Springs Funeral Home with the Reverend David Moseley officiating. Interment will be on Saturday, November 3, 2018 at 10:00 am at Hollywood Cemetery. Honorary pallbearers are Stanley Brown, Orville Poole, the Honorable Tom Smitherman, Britt Wooten, members and staff of First United Methodist Church and Elks Lodge #380. In lieu of flowers, donations may made to either Central Baptist or First United Methodist Church.

The family of Lindrel N Hogaboom Jr. created this Life Tributes page to make it easy to share your memories.