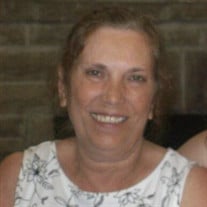 Linda C. Ballard, 59, of Pearcy, Arkansas passed away, Thursday, April 20, 2017. She was born September 21, 1957 in Cotton Plant, Arkansas. She was a housekeeper and of Christian faith. She was predeceased by her father, John Thomas Smith. Survivors... View Obituary & Service Information

The family of Linda C. Ballard created this Life Tributes page to make it easy to share your memories.