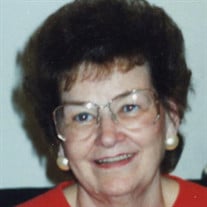 Lavona Ruth White returned to her heavenly home on March 8, 2016. She was born on August 30, 1927 in Atkins, AR. She lived a long and fulfilled life. Ruth’s love and devotion to her family and firm belief in God gave her peace during this time. Ruth was a member of Lakeview Assembly of God Church. She taught Sunday school with her husband for 40 years at Lakeview Assembly of God Church and First Assembly of God Church in Hot Springs, Ar. She inspired many people through her teachings. She was a firm believer of standing on the Word of God and even kept a scripture tucked in her shoe. Ruth was a Godly woman who served and prayed until the end. She was a powerful prayer warrior and always sang songs and hymns even until her return home. Ruth was an Avon Manager for 21 years and loved her job. She touched many lives during her leadership role and always had a smile on her face. She is fondly remembered by all those that knew her. Ruth was blessed with a large family who loved her dearly. She met her husband at a Brush Arbor meeting in Leachville, AR when she was 14 years old. After 5 years of courtship they married. They had three beautiful children and many grandchildren and great-grandchildren. (She also loved her family at Garrett Manor.) After 54 years of blissful marriage, she is preceded in death by her loving husband, William “Bill” White, a son, Billy White, her mother, Ima Younger, brothers, Carl and Buford Lucas, and a sister, Wanda Bradford. Ruth is survived by her loving daughter, Darlene Brown (Don) of Hot Springs, AR, and devoted son, Gary White (Sherry) of Russellville, AR. Loving grandchildren Nancy Delorme (Chris) of Camden, AR, Lisa Pitts (Brian) of Grove, OK, Brandee Johnson (Andrew) of Hot Springs, AR, Greg White of Bella Vista, AR, Sean White of Fayetteville, AR, Chase White (fiancé Rachel Stevens) of Russellville, AR and Calli White of Russellville, AR. Loving great-grandchildren Lance Delorme (Mariah), Skylen Delorme, Hayden White, Lilly Pitts, Evan White, Jaden Johnson, Holly Kate Pitts, and Kylee Johnson. She is also survived by a host of nieces and nephews. Visitation for Ruth White will be at Hot Springs Funeral Home in Hot Springs, AR on March 15, 2016 from 12:00 – 2:00 pm with the funeral services following at 2:00pm. Interment will be at Crestview Cemetery in Hot Springs, AR immediately following the funeral service. Pallbearers are Carl Herron, Tony Russell, Larry Hicks, Greg White, Sean White, and Chase White. Honorary Pallbearers are Chris Delorme, Lance Delorme, Andrew Johnson, Allen Watson, Harold Watson, Danny Woodson, Arkansas Hospice and Staff of Garrett Manor. The following organizations were near and dear to her heart and any memorials can be made to The Garland County Humane Society and Arkansas Hospice of Hot Springs.

Lavona Ruth White returned to her heavenly home on March 8, 2016. She was born on August 30, 1927 in Atkins, AR. She lived a long and fulfilled life. Ruth&#8217;s love and devotion to her family and firm belief in God gave her peace during this... View Obituary & Service Information

The family of Lavona Ruth White created this Life Tributes page to make it easy to share your memories.