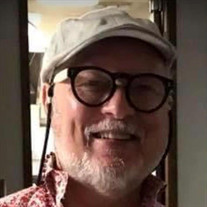 KENT HARRIS BENJAMIN 1953 - 2021 Longtime Austin, TX resident, Kent Harris Benjamin, 67, passed away peacefully on Friday May 14, 2021 at his home in Hot Springs, AR after a long illness. Kent was born in Indianola, MS, went to Greenwood High School, and attended the University of Mississippi. He later lived in Memphis, TN before moving to Austin, TX in the late 1970’s. He would remain there for over 40 years, spending his final years in Hot Springs, AR. Kent spent years working for the Texas Legislative Council. He also worked for local cable television in Austin. He was the program director at the Austin Music Network cable TV channel and did similar work for local access TV. Kent was a talented writer and wrote numerous articles about music for the Austin Chronicle, Goldmine and Pop Culture Press, among others. Kent also wrote liner notes for numerous CD and music DVD releases. He conducted one of the last interviews with his friend, musician Ronnie Lane, which was included on the Eagle Vision DVD “The Passing Show The Life & Music of Ronnie Lane” for which Kent was also credited as Associate Producer. Always on the lookout for new music he liked, Kent spent years working for the South by Southwest music festival in Austin, traveling the world attending concerts with close friends. Everyone that knew Kent would agree that he had an absolute passion for rock and pop music, especially the 1960’s to the mid 1970’s. He had a scholarly, absolutely incredible, encyclopedic knowledge of the music he liked including all the related information such as dates, names, histories of band members and other details. The late, Austin resident and friend of Kent’s, Ian McLagan (keyboard player for the Small Faces, Faces and later the Rolling Stones) once told the author “When I forget what I did in the 1960’s, I call Kent and ask him, he knows.” Many of his friends will tell you stories of the compilation discs or tapes Kent made for them over the years, introducing them to good music they might have missed. A collector to the end, Kent had a huge number of records, tapes, CD’s, DVD’s and video tapes. More than just a collector of objects, Kent also collected a large number of friends who loved him dearly and will forever miss his smile and the child like enthusiasm he had for the music he loved. Kent also loved dogs and cats. Rarely, was he without one or more of them to keep him company. In his final years, as the Parkinson’s like disease gradually shut down Kent’s body, his 3 dogs Jules, Thomas and Pixie were with him constantly and were a source of great comfort. Being a nice man to care for, means you can get and retain excellent caregivers and Kent had some of the best. Special thanks to Lauren Crail and Rose Beard for the great job they did which allowed Kent to remain at his home until the end. He was listening to the music of his friend, Ronnie Lane, when he passed away. Kent is survived by his wife Ann (Rogers) Benjamin of Hot Springs AR. Uncles/Aunts: Lanny Benjamin (Annette), Frances Sneed all of Pontotoc MS, Danny Benjamin (Dianne) of Oxford MS, Jinnie Sneed of Collierville, TN. Cousins: Paula Laney, Robin Nelson, Danae Horton, Kevin Benjamin, Jennie Oglesby, Jake Hudson, Theresa Bass, Marsha Cranes, Phil Sneed and Melinda Samples, Kent was preceded in death by his loving parents, W.O. (Odean) Benjamin & Doris Sneed Benjamin, grandparents Dudley & Arvella Benjamin and Park & Opal Sneed; Uncles/Aunts, Richard Sneed, Walter Sneed, Jimmy and Sis Grubbs; Cousins, Mike Sneed, Dannon Benjamin. We all know Kent is now in a better place, but those who knew him and were touched by his kindness and friendship, will never forget him. A memorial service will be held at 1 p.m. on Saturday May 29,2021, at Sand Springs Methodist Church, in Thaxton, MS. In lieu of flowers, memorials can be made to the W.O. Benjamin Memorial Endowed Scholarship (Kent’s Father). Itawamba Community College Foundation Attn: Jim Ingram 602 West Hill Street Fulton, MS 38843

The family of Kent Harris Benjamin created this Life Tributes page to make it easy to share your memories.