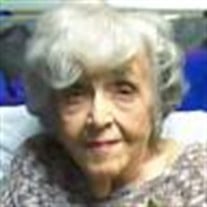 Jonnie Mae Adamson, 75, of Hot Springs, Arkansas died on Saturday, December 23, 2017. She was born in Noland, Arkansas, and grew up in Rockford, IL. Jonnie moved to Hot Springs in 1974. She was a member of Airport Church of Christ, charter... View Obituary & Service Information

The family of Jonnie Mae Adamson created this Life Tributes page to make it easy to share your memories.