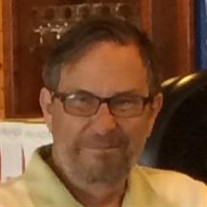 John Mark Lewis passed from this life on May 22, 2017 from complications of a long struggle with a hereditary disease. His brother was by his side. He was 64. John is survived by his son, Mark Ryan Lewis, his brother, Matthew E. Lewis, and his nephew, Connor L. Lewis, all of Hot Springs. He was predeceased by his wife, Candy T. Lewis, and his parents Mark E. and Marie Gresham Lewis. His “adopted family” includes Josh Cannon, Anthony Kling, Alex and Scottie Aurioles, Tina Cox Hennessee, the Lancasters, and many others. John was the first of two children of Mark and Marie Gresham Lewis, born October 11, 1952 in Reno, Nevada. The family relocated several times while he was school-age, and he graduated in 1970 from Warren High School in his mother’s hometown of Warren, Arkansas. He attended Hendrix College and received his Bachelor of Arts degree from University of Arkansas at Monticello. John started work for Dillard’s as a buyer, but eventually returned to Santa Cruz, CA, his “other home”, where the rest of the family was living at that time. John purchased a convenience store franchise and set up in business. While living in Santa Cruz, he met and married his wife, the late Candy T. Lewis. Eventually the business was passed to the rest of the family, and the couple relocated to Arkansas, settling in Hot Springs. John, in concert with the rest of the family, conceptualized and assisted in the creation of Gresham’s Inc., a home interiors and specialty business. When the family elected to close the business and let the family matriarch retire, John settled into a role as property manager of real estate owned by the family. With more free time available, he served on the board of the Humane Society of Garland County, with the Hot Springs Planning Commission, and with the Whittington Valley Neighborhood Association, along with other civically-minded efforts. John had a very giving spirit and was well known for his efforts with at-risk youth, and for assisting many young people with learning life skills while encouraging their educational efforts and transition from children to contributing adults. Many of the youth he mentored list him as the primary reason they were able to go forward from troubled adolescence and successfully into adulthood. John’s ashes will be scattered in multiple locations significant to his life, per his and his family’s wishes. A memorial marker will be placed next to his father at Cedar Branch Cemetery near Pine Bluff. In lieu of a traditional service, a memorial service and celebration of his life will be held at Hot Springs Funeral Home on Saturday, June 3rd, from 2 to 3 pm. Visitors will be encouraged to share their favorite memories of and tributes to John. In honor of his favorite color, please “Wear Purple for John” to the memorial celebration – a touch of purple in his memory. In lieu of flowers, and in recognition of his dedication to the Whittington Valley area the family welcomes donations in his memory to the Whittington Valley Neighborhood Association, 711 Whittington Ave., Hot Springs, AR 71901.

John Mark Lewis passed from this life on May 22, 2017 from complications of a long struggle with a hereditary disease. His brother was by his side. He was 64. John is survived by his son, Mark Ryan Lewis, his brother, Matthew E. Lewis, and... View Obituary & Service Information

The family of John Mark Lewis created this Life Tributes page to make it easy to share your memories.

John Mark Lewis passed from this life on May 22, 2017 from complications...