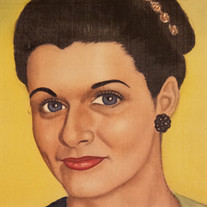 Longtime resident, Jo-San (Johnson) Short, 92, was reunited with the stars during a beautiful, full moon. Born in Texarkana, Arkansas to Joseph E. and Carrie (James) Johnson, formerly of Columbia, Louisiana, her family followed the jobs during the Depression years, living in several New Jersey cities, San Antonio, before finally settling in Hot Springs. Jo-San attended over a dozen different schools during her elementary years. As a senior at Hot Springs High School, she provided comic illustrations for the 1943 Old Gold Book to help lighten the mood during that very tough time in our Nation. She studied art at the Minneapolis Museum of Art and interned in commercial art at Brown and Bigelow, Co. in St. Paul, Minnesota. A prolific artist, she was a charter member of the Southern Artists Association in Hot Springs. Jo-San won several awards for her art. Whether painting, ceramics, photography, or airbrush, she worked on expanding her artistic talents with her innovative techniques. She was married to Max J. Short, from Lucky, Arkansas, who served in the U.S. Marine Corps in WWII and later at the Army and Navy Hospital and at the Army Aviation School at Fort Rucker, Alabama. Upon his retirement from the U.S. Army in 1967, the family returned to their Hot Springs home on Avery Street. Jo-San (her name taken from her beloved grandfather, Joseph Sanford Johnson) worked as a masseuse beginning in 1946 on bath-house row, and later, part-time at the Arlington Hotel. She and her mother sold antiques at their Attic Charm shop on Whittington Avenue and gave tours of that unique collection until 1993. Their frequent trips to the northeast to visit relatives netted many interesting “finds” that they incorporated into their shop. Jo-San is survived by her son, Jeffrey Short, his wife, Joye McCarley-Short, formerly of Pine Bluff, Arkansas, and their son, Zachary, living in Pittsburgh, Pennsylvania. Jo-San’s younger sister, Margaret Johnson Hoy, and her family live in the Portland, Maine area. Donations in lieu of flowers be made to the Arkansas School for Mathematics, Science and the Arts Foundation, 200 Whittington Ave, Hot Springs AR 71901. A Celebration of her life will be held 2:00 P.M. Wednesday, May 24th at Hot Springs Funeral Home Chapel.

Longtime resident, Jo-San (Johnson) Short, 92, was reunited with the stars during a beautiful, full moon. Born in Texarkana, Arkansas to Joseph E. and Carrie (James) Johnson, formerly of Columbia, Louisiana, her family followed the jobs during... View Obituary & Service Information

The family of Jo-San Short created this Life Tributes page to make it easy to share your memories.