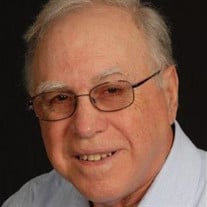 Jerry Lee Hancook of Hot Springs Village passed away at home on September 4, 2017. He is survived by his wife, Kayleen Hill-Hancook (Katy); daughter Heather Richards (Marc); son Thomas Hancook; grandchildren Kaleigh and Evan Richards; brother Walter Hancook (Dawn); as well as stepdaughter Karen Flynn (Jeff), stepson Kevin Hill; grandchildren Ashley Washburn (T.J.), Matthew and Colleen Flynn and great-grandchildren Cali and Clyde Washburn. Born in Flint, Michigan, to Vivian and Walter Hancook on April 16, 1939, Jerry lived in Michigan until he and Katy moved to Hot Springs Village in 2000 from Farmington Hills, Michigan. Jerry graduated from Michigan State University with a Bachelor’s degree in City Planning and worked as a city planner in Muskegon, MI and Kalamazoo, MI. After receiving his Master’s degree from Central Michigan University he taught science, math and drafting at Clio High School in Clio, Michigan. As years progressed, he moved into teaching CAD (computer assisted drafting), his favorite subject to teach. After he retired from Clio Schools he taught descriptive geometry at Baker College in Flint. Jerry and his children were avid tent campers and spent many summer weekends enjoying Michigan’s campgrounds; cross country skiing was their winter hobby. Jerry was always interested in anything to do with cars. He and his 1970 Oldsmobile 442 were members of the Hot Springs Village Cruisers. Jerry was a member of the HSV Mens Nine Hole Golf group as well as The Wild Bunch golf group. Jerry was also a member of the Hot Springs Village Kiwanis club and a member of Kirk in the Pines Presbyterian Church in the Village. During their 26 year marriage Jerry and Katy traveled often and took many interesting and unusual trips. A favorite was sailing several Greek Islands on the Aegean Sea with two other couples in a 28 foot catamaran. A memorial service to celebrate Jerry’s life will be held at the Kirk in the Pines 275 Asturias Drive on September 23 at 10:00 AM. In lieu of flowers, donations may be sent to AR Hospice or to Kirk in the Pines Presbyterian church. Arrangements have been entrusted to Hot Springs Funeral Home and Genesis Legacy of Life Program in Memphis, TN.

The family of Jerry Lee Hancook created this Life Tributes page to make it easy to share your memories.