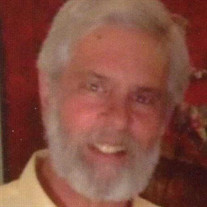 Jeffrey T. “Jeff” Goslee, 63, of Hot Springs was welcomed into his Lord’s arms on Friday, September 9, 2016. He was born on February 22, 1953 in Hot Springs to the late Thomas M. and Helen Watson Goslee. Jeff was a Navy veteran during the Vietnam Era and a commercial printer owning Goslee Printing for 38 plus years. He was a charter member of Hot Springs Baptist Church and a member of the church’s Celebration Choir and Orchestra. He was a member of the Hot Springs Concert Band and was a founding member of the C.S.O. “Senior Citizen Band” where he joined his father and others in 1975 and where he met his future wife, Cheryl in the Bicentennial Summer of 1976. In the spring of 1978 his parents opened Goslee Printing, Inc. and Cheryl joined the small contingency in the summer of 1978. Jeff and Cheryl married in a small ceremony on April 30, 1979 and worked in the trade alongside his family and continued until his being called into his Lord’s arms. He served in many areas with his church including running the sound system, weekly set-up and tear-down during the “nomadic” years of Hot Springs Baptist Church. He provided the printing for the church and when it came to pass he joined the church Music Ministry playing his big shiny silver euphonium. Jeff was a man with a servant’s heart. Survivors include his soulmate and wife, Cheryl Hill Goslee of Hot Springs, daughters, Jennifer Woodward of Hot Springs Village and Greta Goslee of Hot Springs, two granddaughters, Memory Williams and Summer Jones and two great-grandchildren. Also surviving are his uncle and aunt, Charles and Peg Goslee of Hot Springs, favorite cousin, Marsha Goslee Burford as well as several other cousins on the Goslee side, three sisters-in-law, three brothers-in-law and numerous nieces and nephews from the Hill family. P.S. Jeff, I love you and will never stop missing you. Cheryl Celebration of Jeff’s life will be Wednesday at 11:00 A.M. in the Hot Springs Baptist Church with Reverend Manley Beasley, Reverend Michael Pounders and Reverend Mike Smith officiating. Pallbearers will be Richard Hill, John Carter, Tyler Carter, Corky Martin, David Sommer, Shane Osborn and Dr. David Smith. Honorary pallbearers are Michael Lambert, Michael Brodrick, Tim Arnold, Davy Rusher, Duy Ha, Reverend Bart Morrison, Reverend Danny Baxter, Mark Vanderburg and the “Park Avenue Gang” from back in the day. Visitation will be Tuesday from 6:00 P.M. until 8:00 P.M. at Hot Springs Funeral Home. Burial will be in Crestview Memorial Park with full military honors by the U.S. Navy and the VFW Post 2278 Honor Guard. Memorials have been designated to the Hot Springs Concert Band, P.O. Box 8667, Hot Springs Village, AR 71909 or Hot Springs Baptist Church Celebration Music Ministry, 144 Weston Road, Hot Springs, AR 71913.

The family of Jeffrey T. Goslee created this Life Tributes page to make it easy to share your memories.