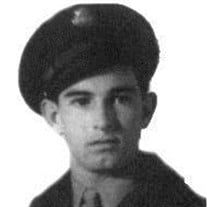 James Kimball McCully, Sr., 91, of Hot Springs, died Sunday, July 31, 2016. He was born April 13, 1925, to Grover "Cleve" and Ethel Crowell McCully. He was the youngest of five boys growing up during the depression and getting by just relying on each other. Following the example of his brothers, he enlisted in the U.S. Air Force in July of 1943 and flew many missions over Italy as a ball turret gunner for the 450th bombardment group. After the war, he began his 35-year career as a letter carrier for the U.S. Postal Service. In 1948, he married his true love Mary Branch, who was his "guardian angel" for almost 65 years until her death in 2013. Since then he kept her framed photo nearby so she could continue to watch over him. He was the devoted father of Nancy McCully Shipp and James K. McCully, Jr., ready to provide for them emotionally and financially throughout his life. As a member of Emmanuel Baptist Church for over 50 years, he was a strong Christian witness serving many years as a deacon and church treasurer. His joys were as simple as going to yard sales, shopping for bargains, camping with his family, deer hunting with his buddies, attending HSHS class reunions and meetings of retired letter carriers, doing jigsaw and crossword puzzles, petting his kitties, but most of all entertaining any willing audience with his stories about his childhood, family, military experiences, job as a postman, and his memories of all his friends and acquaintances throughout his nine decades of life. He was preceded in death by his beloved wife Mary, his parents, and his four older brothers and their wives - Owen, Sidney (Lolly), Hack (Bobo), and Howard (Pauline). In addition to his children, he leaves behind his son-in-law George Shipp, who tirelessly spent many hours assisting him as his health and circumstances changed. He is also survived by his brother-in-law Zachary Branch, Jr., who visited often offering his help, his sister-in-law Wanda Branch, and several nieces and nephews. The family thanks Dr. John Featherston, Dr. Robert Kleinhenz, Gentiva Home Health, Pines Rehab, Garland Rehab, Pastor Steve Lunsford, and the staff and residents of Crown Trace Villa. Honorary pallbearers are Warren Pittman, Mike Karber, Mike Branch, Alan Story, Bill Randel, and his new friend Charles Morris on the staff of Crown Trace Villa. Visitation will be 7:00-9:00 p.m. at Hot Springs Funeral Home on Wednesday, August 3. The funeral service will be at 2:00 p.m. on Thursday, August 4 with Reverend Bill Carter officiating. Burial will be private at Crestview Cemetery.

James Kimball McCully, Sr., 91, of Hot Springs, died Sunday, July 31, 2016. He was born April 13, 1925, to Grover "Cleve" and Ethel Crowell McCully. He was the youngest of five boys growing up during the depression and getting by just relying... View Obituary & Service Information

The family of James Kimball McCully, Sr. created this Life Tributes page to make it easy to share your memories.