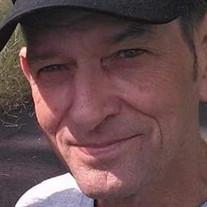 James Loyde Haney, Jr. (Junior) age 61 of Nashville, AR, left this world on Saturday, September 15, 2017, in Hot Springs, AR, surrounded by his children and father. He was born on September 16, 1955, to Loyde Haney and Peggy Briggs Haney in Nashville, AR. He was preceded in death by his mother, one brother George David Haney (Derby), and one sister Brenda, and a niece, Wendy Hall. James is survived by his father, Loyde and one brother Johnny Haney both of Sulphur Rock, AR and his children, Nikki Elms (David) of Bend, TX, formerly of Nashville, Janet Derrickson (Jeff) of Cave City, AR, and TJ Haney of Cave City, AR. He also leaves behind six grandchildren, Drew, Bella, Reiss, Thong, Thuong, TJ, and one niece and nephew, several cousins, his fiancé Lori Murphy, his best friend, Ray Westfall, and many other friends and relatives. James was baptized into the Christian faith. He was very outgoing and liked by everyone. His hobbies were being with friends and family, fishing and he loved to read. He was retired from truck driving. He loved to live life to its fullest. He loved his children and grandchildren in his own special way and had a big heart. He always helped friends in need as much as possible. There will be a private memorial with close friends and family at a later date. Memorial contributions may be mailed to PO Box 162, Bend, TX 76824.

The family of James Loyde Haney created this Life Tributes page to make it easy to share your memories.