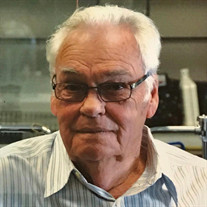 Dr. James Edward Bennett, B.S. Ph.D., passed away peacefully on Saturday, October the 6th, with his family by his side. He was preceded in death by his parents, father James Bennett, stepfather Herman Baker and mother Leona Baker. He is survived by his survived by his loving wife and soul mate of sixty-one years, Sharron Stanfield Bennett of the home; daughters, Dr. Katherine (Kathy) Bennett Ensor of Houston TX, Jan Bennett Arant and husband Michael of Jonesboro; sons, Dr. John M. (Mel) Bennett of Berea, Kentucky, Marty Bennett and wife Deanna of Jonesboro; sisters, Barbara Fletcher and husband Buddy, of Pagosa Springs, Colorado, Sarah Baker of Boise, Idaho; brothers, Arthur Bennett and wife Candy of Vancouver, Washington, Albert Bennett and wife Elsa of Boise, Idaho, John Baker and wife Karen of Climax Springs, Missouri; nine grandchildren, Angie Bennett, Allyne Ensor, Seth Ensor, Lindsey (Bennett) Groth, Bryce Bennett, Brett Bennett, Aria Bennett Troutt, Jacob Troutt, Mitchell Troutt and five great grandchildren. Ed lived a life of passion, accomplishment, dedication, and vigor. He was a man of tremendous character, integrity, and loyalty. He was gifted with a high degree of intelligence, a big heart, and an open mind. His zest for life was unmatched, as was his competitive fire and enthusiasm for all that life had to offer. Born in Wink, Texas on November 27, 1935, Ed grew up exploring the opportunities of west Texas and New Mexico. He graduated from Lamesa High School where he excelled in sports as well as the classroom. Being the first in his family to graduate high school, he continued his scholarly path to college. Influenced by winning an English scholarship and a desire to play basketball, he began his educational journey at Texas A&.M University. His pursuit in playing basketball would take him from Texas A&.M to Cisco Junior College and on to Northwestern State College in Oklahoma. It was there his educational career shifted gears. His physics professor recognized his abilities and mentored him away from the basketball court and into the classroom, which would become his magical realm for the next sixty years. His next stop would be Oklahoma State University where he earned a Ph. D. in physical chemistry with an emphasis in high temperature chemistry. From Oklahoma State, he joined the chemistry faculty of Arkansas State University. He would spend thirty-nine years building a lasting legacy as a distinguished professor, mentor, educator, and researcher. He was a maverick in the field of high temperature chemistry, publishing many discoveries in science and providing research for such entities as the Department of Energy (Advanced Fuel Research) and NASA (Research consultant) Lewis Research Center. He was recognized by Northwestern State College as a distinguished alumnus and honored by Arkansas State University by being selected to the "First 100 Distinguished Faculty of Arkansas State University's First 100 Years”. Ed's accolades and achievements were countless, but his most proud achievement as a scholar was his time in the classroom, educating and mentoring future doctors, nurses, and educators. His straight forward, honest approach, and ability to communicate at all levels, made him a favorite among generations of students that were lucky enough to have him as a teacher and mentor. There are many stories of his dedication to students willing to learn, for whom he went the extra mile. Upon retiring and leaving his mark at Arkansas State University, Ed was employed as a research consultant for the K-Tech Corporation in Hot Springs, Arkansas. This gave him and wife Sharron an opportunity to move to Hot Springs to live on the lake and enjoy the many hobbies and passions they shared. However, it didn’t take long before they were pulled back into their calling as educators. While Sharron taught mathematics, Ed taught chemistry and took the position.as the Chairman of Math and Sciences at the National Park College. He held this position for fifteen years, retiring at the age of seventy-nine, leaving behind another amazing legacy. Ed's most cherished legacy is his family. It was with his family that .he found his inner peace. His wife, Sharron, was his rock and he praised her and gave her full credit for the success of their growing lineage. His love and pride were paramount, as was his unending loyalty. He was a patriarch in the truest sense, the wise man that had everyone’s best interest at heart. He wasn't one to waste words on idle conversation, but if you were in need of straight forward advice, or just wanted to enjoy a session of Bob Dylan music, he was your man. When visiting with Ed, you knew you were in the presence of an incredible man that set the bar high for living a full, adventurous, and an accomplished life. A self-described "Renaissance Man from West Texas", he took life seriously, ignoring the petty nature of things while enjoying the intricate essence and challenges that life had to offer. He accepted us for who we were and encouraged us to strive to reach our maximum potential. He will continue to be with us in our hearts and minds, and we will feel blessed for having such a remarkable man in our lives. He made us better and made the world a better place. His written words, "In the end, only love remains." A Celebration in honor of Ed's Life will be held Sunday, October, 28th, at 2:00, in the Fowler Center, located on the Arkansas State University Campus in Jonesboro, Arkansas. All family and friends are invited to attend. For information about contributing to the James E. Bennett Scholarship fund for Advanced Study in Arts, Sciences and Medicine, contact the family through [email protected]

Dr. James Edward Bennett, B.S. Ph.D., passed away peacefully on Saturday, October the 6th, with his family by his side. He was preceded in death by his parents, father James Bennett, stepfather Herman Baker and mother Leona Baker. He is survived... View Obituary & Service Information

The family of Dr. James Edward Bennett created this Life Tributes page to make it easy to share your memories.