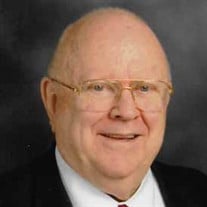 “ H. Roger York, 77, of Hot Springs Village, went to be with the Lord on May 15, 2018. He was born June 10, 1940 in Des Moines, Iowa to H. Parker and Lois Arlene York. Roger came from five generations of attorneys, one Missouri Supreme Court Judge and one Preacher. By the age of fourteen he earned his Eagle Scout Badge, God and Country Award and had shaken hands with President Dwight David Eisenhower, on the “Report of the Nation”. That same year he went mountain climbing at the Philmont Scout Ranch in the foothills of the Santa De Cristo range of the Rocky Mountains where years later as an Assistant Scout Master he would take his son Jeff on the same journey. During Junior High Roger learned and honed his skills in Judo and would eventually study and obtain his second degree black belt in Japan before graduating college. With this knowledge of Judo, Roger volunteered and taught over 400 children at the YMCA over the course of seventeen years, taking his Judo teams all over the state of Missouri and Iowa. Roger graduated in three years from Northeast Missouri State University with a Bachelor of Arts, majoring in Prelaw with a minor in History and Foreign Language. He went on to obtain his Doctor of Jurisprudence in just two years, from the University of Missouri, by going year round and working as a paramedic to pay for law school. While in college he met the love of his life, Sandi and in June of 1962 they were married. They opened the Adair County Abstract and Title Company in the same year, where he worked as the senior examining attorney for several large title insurance companies. As his father before him held a passion for the law so did Roger. So much so while working at the Abstract Company he went back to college at night and received a four year degree in Criminal Justice. He was commissioned in Missouri as a police officer and a deputy sheriff. He assisted the Kirksville Police Department and the Adair County Sheriff’s Office by establishing the first Kirksville Police Auxiliary and the Adair County Special Deputy unit. In 1999, Roger sold the business and retired with his wife to Hot Springs Village, AR. His love of music and the Lord started at a young age. In his younger years, he studied to become an operatic tenor, sang southern gospel with greats such as Doris Akers, appeared in off Broadway productions of Carrousel and Showboat, directed “The Octones”, a double quartet and sang with the “Blue Notes” Big Band. In his later years, he sang with former United States Attorney General, John Ashcroft, in an impromptu concert at a Missouri State Title Conference, was a soloist in the Balboa Celebration Choir, a member and soloist of the Village Chorale, a member of the Celebration Gospel Quartet, Lead in the Village Aires Barbershop Chorus, a member of the Coronado Baptist Choir and Grace Gospel Quartet. Throughout his life he was dedicated to a life of service to God and his fellow man. Roger served as a chairman of the church board and various church committees in Kirksville, MO. He was president of the Kirksville Rotary Club, a member of the Chamber of Commerce and Jaycees. He was a Master Mason in the Masonic Hall of Adair Lodge Number 366. He was a Noble of the Mystic Shrine in Moila Temple of St. Joseph, Missouri. He was also an amateur Ham Radio operator who assisted in the development of the first civil defense Military Affiliate Radio System in Kirksville, Missouri. Roger was preceded in death by his parents and a brother and sister in infancy. He is survived by his loving wife of 55 years, Sandra K. Poe York of Hot Springs Village, Arkansas, his children, Deborah K. Benton of Waddell, Arizona, Rebecca A. York and son-in-law Trevor A. Graff of Buckeye, Arizona and son Jeff T. York and daughter-in-law Brianne M. York of Houston, Texas, his beloved 5 grandchildren, Bradlea Michele (York) Schillinger, Elizabeth H. York, Rachel N. Benton, Natalie M. Benton and Daniel C. Benton III. He was a Genesis Donor to the Medical Education & Research Institute, Memphis Tennessee. A Celebration of Life service will be held at Coronado Baptist Church in Hot Springs Village, Thursday, July 12th at 11:00 AM. The Family wishes to express a special thank you to Arkansas Hospice who lovingly cared for Roger to the end of his life on earth. In lieu of flowers, donations may be given to Coronado Baptist Church Building Fund, 150 Ponderosa Lane, Hot Springs Village, Arkansas 71909 or Arkansas Hospice Foundation, 14 Parkstone Circle, North Little Rock, AR 72116.”

The family of H. Roger York created this Life Tributes page to make it easy to share your memories.