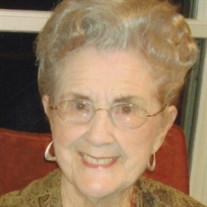 Gussie Mae “Gan Gan” Schweer, 94, of Hot Springs passed away Monday, January 4, 2016. She was born on August 15, 1921 to the late Harry and Edna Speaks in Rison, Arkansas. She was a member of Grand Avenue Methodist Church, where she was an active member and volunteer. Mrs. Schweer was the office manager for Schweer Cadillac, Pontiac and Toyota dealership which was owned by her husband. She remained with the dealership after he sold the dealership for a few years in the same capacity. She was predeceased by her husband, Kenneth Schweer, one son, George Schweer and one grandson-in-law, Chuck Weber. Survivors include her daughter, Suzanne (Chris) Skrivanos, one daughter-in-law, Sharron Schweer, five grandchildren, SuSu (Brad) Burnette, Brent (Sarah) Barnes, Tiffany (Stephen) Bell, Kenny (Carrie) Schweer and Sheri (Jeff) Johnson and twelve great-grandchildren. Visitation will be Friday from 1:00 P.M. until service time. Celebration of her life services will be at 2:00 P.M. in the Hot Springs Funeral Home Chapel with Reverend David Fleming officiating. Pallbearers will be Brent Barnes, Kenny Schweer, Brad Burnette, Stephen Bell, Jeff Johnson and Chris Skrivanos. Burial will be in Greenwood Cemetery. Memorials have been designated to Grand Ave. Methodist Church. She loved spending time with her family who adored her and she will always be remembered as the sweet, sweet lady that she was. “Sweet as Pie”

The family of Gussie Mae Schweer created this Life Tributes page to make it easy to share your memories.