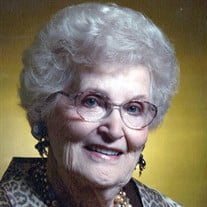 Gertie B. Parker Watson, was born October 30, 1925 to Granville & Josie (Black) Gaston in Mt Ida, Arkansas. She passed away on July 1, 2021 at the age of 95. Gertie graduated from Norman High School in Norman, Arkansas in 1943. She married Coy Parker on November 25, 1944. Gertie and Coy had two daughters, Sharon and Rebecca. Gertie had many jobs over the span of her lifetime including working in the shipyard, switchboard operator, selling Stanley Stainless Steel. She worked for the Hot Springs Plumbing and Hardware in 1944. Coy was a plumber and started working his own business in 1962 which became Parker Plumbing. Gertie worked in their office doing bookwork and answering the phone. She ordered all the parts and schedule the calls. The Company grew over the years and eventually employed 4-6 plumbers. Gertie got her Master Plumbing License in 1975, being the first female in the Arkansas to get her Master’s License. Coy passed in November, 1974. Gertie married Lawrence (Larry) Watson in 1975. They continued to own and operate Parker Plumbing till she retired in 1995. Larry and Gertie joined others to refurbish Jones Park, working to clean it, mow, paint, and raise money for basketball goals, covered seating and picnic tables. Gertie realized she had a love for political life and volunteered for various elections and working at election polls. She even went to Bill Clinton’s inauguration and one of the balls in Washington, DC. In 2007, she became a Justice of the Peace and served in that capacity until December, 2010. Gertie was a charter member of the National Park Christian Church in Hot Springs and is a current member of the Hot Springs First Christian Church. She was also a member of the Emblem Club, Civitan, VCK Club and Red Hats. Her favorite thing to do was working in her yard and you would see her working there in the evenings and weekends. She had the most gorgeous yard and flowers and won Yard of the Month more than once. Gertie is preceded in death by her parents, Granville & Josie Gaston, brothers, JD Gaston, Everett Gaston, sister, FloElla Parker, husbands, Coy Parker and Larry Watson, daughter, Sharon Parker Tappana, great-grandson, Dayton Michael Johnson, and grandson-in-law, Michael White. Survivors include, daughter, Rebecca Parker; grandchildren, Chris (Darlene) Johnson and Joni White. Also, great grandchildren, Jaclyn (Lee) Lobbs, Kimberly (Jon) Parsons, Cole Smoke; great, great grandchildren, Preston (Jennifer) Stanfill, Lexi (Kyle) Fisher, Jefferson Lobbs, Ayden Parsons, Jayce Plumley and great, great, great grandson, Louie Stanfill; plus a host of nieces, nephews and other relatives. Services will be 11:00 AM Tuesday, July 6, 2021 at First Christian Church. Burial at Memorial Gardens Cemetery Visitation will be 5:00 – 7:00 PM Monday, July 5, 2021 at Hot Springs Funeral Home. The family wishes to thank Kindred Hospice and all of her caregivers. Thank you for the good care and for loving her.

Gertie B. Parker Watson, was born October 30, 1925 to Granville & Josie (Black) Gaston in Mt Ida, Arkansas. She passed away on July 1, 2021 at the age of 95. Gertie graduated from Norman High School in Norman, Arkansas in 1943. She married... View Obituary & Service Information

The family of Gertie Parker Watson created this Life Tributes page to make it easy to share your memories.