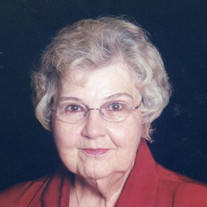 Frances Gabriel Forsberg, age 89 of Hot Springs and a permanent resident of Levi Towers, died March 14, 2017 after a brief illness in Laveen, Arizona. She was born August 23, 1927 in Hot Springs to the late George A. and Norma Jean Mowry Gabriel. Frances attended the University of Arkansas in Fayetteville and graduated from the Chicago School of Radio Techniques. She was employed by several radio stations in various capacities and was a well-known radio broadcaster. Frances starred in many Community Player productions and was a member of St. Mary’s Greek Orthodox Church, which her father was instrumental in constructing. After retiring from the Hot Springs Police Fines Department, Frances was a recreational cryptographer and traveler, and was a very active participant at Oaklawn Gaming. She was always young at heart and loved her family, her church, her friends, & a good game of Scrabble. Frances was creative, interesting and funny, seeking the good in the world and sharing it with others. Frances was always ready to help those in need with a meal, a ride, a smile or all of the above. She is survived by her two daughters - Gabriel “Gabe” Forsberg (Howard Fischer) of Laveen, Arizona and Ellen Gray (Dr. John Gray) of Twin Falls, Idaho. She is also survived by one nephew - Mike Patterson (Betty or “B”) of Great Falls, Montana; one niece - Missy Patterson of Ypsilanti, Michigan; and her godson - Chris Skrivanos of Hot Springs. Her sister Helen Patterson (William R. “Pat”) and nephew, Steve Patterson (Linda) pre-deceased her. She has three grand-daughters: Stephanie Pinkston Brewer (Paul), Alexandra Gray, & Theodora Gray; and Santa’s Secret Helper “grandson” Cooper Jack Bull. There are two great-granddaughters - Amelia Brewer and Sophia Brewer. The family sincerely thanks Diane Goltz, Susan Siegel, Lisa Harper Duranleau, Betsy Smith, Connee & Mike Ellis, David Loar (Levi Towers), Mildred Smith and other wonderful friends who helped her live independently all these years. Visitation will be Thursday from 11:30 A.M. until service time at the Greek Orthodox Church, 502 Morrison St., Hot Springs, AR 71901. Funeral services will be Thursday, March 23, 2017 at 12:30 P.M. at the Greek Orthodox Church with Father Nicholas Verdaris officiating.. Pallbearers will be John Gray, Howard Fischer, Chris Skrivanos, Peter Fotioo and Sam Stathakis. Honorary pallbearers are Dr. James Suen of UAMS and the HS Police Department. Burial will be in Greenwood Cemetery. In lieu of flowers, memorials have been designated to the Greek Orthodox Church, 105 Sherri St., Hot Springs, Arkansas 71901

Frances Gabriel Forsberg, age 89 of Hot Springs and a permanent resident of Levi Towers, died March 14, 2017 after a brief illness in Laveen, Arizona. She was born August 23, 1927 in Hot Springs to the late George A. and Norma Jean Mowry Gabriel.... View Obituary & Service Information

The family of Frances Gabriel Forsberg created this Life Tributes page to make it easy to share your memories.

Frances Gabriel Forsberg, age 89 of Hot Springs and a permanent...