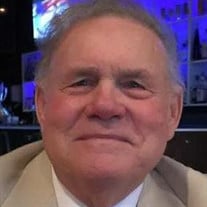 Floyd Stephen “Steve” Land, 77, of Hot Springs passed away October 30, 2017. He was born March 8, 1940 in Royal, Arkansas to the late Dacus and Iva Land. Steve was a member of Airport Road Church of Christ where he served as an Elder for 30 years. He graduated from Lake Hamilton High School in 1958. In 1967 he became an Electrician working in the industry for 50 years and later owned and operated his own business, Land Electric. He was a mentor to countless electricians and in his spare time loved to fish, take pictures, and play the banjo. The most important thing to Steve was family. He was a wonderful and loving husband, father, and grandfather who leaves behind a lifetime full of memories and will be missed by many. He is preceded in death by his parents and his first wife of 51 years, Shirley Ann Land. Survivors include his wife, Sandy Love-Land; son, Tommy (Alissa) Land; daughters, Denise (Todd) Ricks, Shelly (Kevin) Wheeler, and Terri (Jayme) Muniz; grandchildren, Michael (Brittany) Land, Justin Land (Elizabeth Smart), Amanda Ricks (Luke Rowlett), Karson Wheeler, Kynli Wheeler, Amanda Muniz, Amber Muniz, and Kelsey Love; great-grandchildren Zoey and Sam Land; sister, Charlotte Worley-Mabery; numerous nieces, nephews, cousins, and brothers and sisters-in-law. Services will be held 10:00 AM, Friday, November 3, 2017 at Airport Road Church of Christ with Michael Cox officiating with burial to follow at Lowe Cemetery. Visitation will be held 9:00 AM until service time at the church. Pallbearers include Ralph Hankins, Rick Hester, Alex Warnes, Daniel Padgett, Eddie Lamb, and Glen Barber. Honorary Pallbearers include Jack Smith, Tommy Sorrells, Stuart Klompus, Danny Padgett, Marvin Hester, the Elders and Deacons of Airport Road Church of Christ. The family would like to say a special thank you to CHI St. Vincent, Genesis Cancer Center, and Sandy for being his caregiver.

The family of Floyd "Steve" Land created this Life Tributes page to make it easy to share your memories.