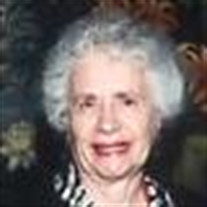 Evelyn Mann, 93, of Hot Springs, Arkansas died on Thursday, November 23, 2017. She was born December 14, 1923, in Plainview, Arkansas to the late Charles and Mattie Gossett. She was preceded in death by her brother RL Gossett, her first husband Zeke Edwards, her husband Elmer Mann and one son Terry Mann. She is survived by her son Rex Mann (Bobbi Jo), of Hot Springs, daughter-in-law, Maggie Mann of Florida, niece, Cynthia Rickman, nephew, Roger Gossett, seven grandchildren, eight great grandchildren, and many more spiritual children and grandchildren. Evelyn was a vivacious, joyful person who never met a stranger. Her genuine love for people and infectious laugh endeared her to everyone who met her. Losing her first husband in a plane crash at the young age of 28 sent her on a quest for answers to life's big questions and the answers changed her life forever. Her study and research of the Bible caused her to develop a strong relationship with God and his son Jesus Christ and she was baptized as one of Jehovah's Witnesses in 1951. She had an overwhelming desire to share her faith with others and for over 60 years she spent as many hours as possible to help countless others learn about Jehovah and his purpose to make the earth a paradise again through the Messianic Kingdom. Serving God and striving to do his will became her life's purpose and gave her joy and hope despite many difficulties and trials. Although for a while she is sleeping and we miss her, we look ahead to the wonderful time soon when she will be resurrected to paradise Earth. A memorial service will be held Saturday, December 2, 2017 at 2 pm at the Kingdom Hall of Jehovah's Witnesses located at 225 Marion Anderson Rd., Hot Springs, Arkansas.

Evelyn Mann, 93, of Hot Springs, Arkansas died on Thursday, November 23, 2017. She was born December 14, 1923, in Plainview, Arkansas to the late Charles and Mattie Gossett. She was preceded in death by her brother RL Gossett, her first husband... View Obituary & Service Information

The family of Evelyn Mann created this Life Tributes page to make it easy to share your memories.