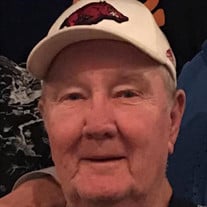 Earl Herbert Hudson Jr. Earl Herbert Hudson Jr., 82 of Hot Springs passed away Tuesday, October 20, 2020 after battling Covid-19. He was born July 2, 1938 in Bethlehem, AR to the late Earl H. Hudson Sr. and Josephine Hudson Felts. Earl was also predeceased in death by his wife Rosalind Goltz Hudson, sister Pauline Crain, brothers- in- law Bud Crain and Ralph Brouillard, in-laws Lewis and Bernice Lockwood Goltz and his hero John Wayne. Earl is survived by his daughter Madeline Helene Bull, grandsons Cooper Jack Bull, Spencer (Mimi) Bull of Austin, TX, great-grandson Lucas Bull, his sister Helen Brouillard of LaMarque, TX, sisters-in-law Susan (Lou) Siegel and Dr. Diane Goltz of Hot Springs, his heart granddaughters Bella, Whitnei, Sloane, Marly, and Auri, plus his many nieces, nephews, cousins, friends and his beloved Biskit and Sassy. Earl was runner up for the National Boys Club Boy of the Year Award. He was a 9 time Arkansas Boxing Golden Gloves champion. He played football and baseball throughout his school years. He was a 1956 graduate of Hot Springs High School. While attending the College of the Ozarks Earl signed a professional baseball contract, however a shoulder injury prevented him from playing. His love of sports transferred him from a player into a coach, umpire and fan. He was an avid hunter and fisherman, loving to share his skills with younger generations. He was a lifelong member of Ducks Unlimited, Arkansas Wildlife Federation, the ol Green Deer camp, the Pat Pinson hunting club and fished in the Tuesday night tournaments. Earl was a 20 year veteran of the United States Air Force including a tour in Vietnam and a 20 year retiree of Weyeraeuser. His smile and laughter could light up any room. Earl’s storytelling ability was enjoyed by every age person from the youngest to the oldest in the room. Earl the Pearl will live on in our hearts and memories. Honorary pallbearers are Mike and Jamie Radimer, Dr. Tim English, Laryssa Blunt APRN, Dr. Bobby Muldoon, Dr. Fred Heinemann, Chris Coble, Rachel Heffernan, Diane Hicks, Staci Caldwell, Cheryll Long, Melody and Charles Timm, Lisa Campbell, Leslie and Don Nutt, and the Miami bums. In lieu of flowers, memorials may be made to the charity of your choice. We will start the zoom at 3:45pm central time. The service will start at 4pm. Participants will be muted during the service. Join Zoom Meeting https://hssd-net.zoom.us/j/88657103314 Meeting ID: 886 5710 3314 There is no password needed

The family of Earl Herbert Hudson Jr. created this Life Tributes page to make it easy to share your memories.