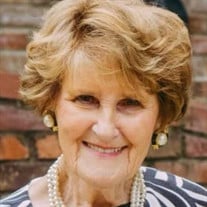 Drew R. Terry, 88, died peacefully Friday, November 26, 2021. Born in Durant, Oklahoma, on September 2, 1933, Drew was the only child of E. C. Reeves and Sylvia Armstrong Reeves of Tishomingo, Oklahoma. In addition to her parents, she was predeceased by her husband of 65 years, Dr. William Charles Terry. Loving survivors include her children: Druann and Dr. Barry Baskin, Allison and Mr. James Dowden. Surviving grandchildren include: Erin Baskin Coleman (Jared), Blair Baskin Ondrey (Curtis), and Jack Dowden. Drew felt very blessed to meet her first great grandchild, Baskin Coleman, before she died. Drew attended Oklahoma State University in Stillwater, Oklahoma, where she met Bill Terry on a blind date. They were married on May 16, 1953 at the Pi Beta Phi Sorority House on campus as the men were all being drafted for the Korean War. After the war, Bill and Drew moved to Hot Springs, to start Bill’s Veterinary practice where Drew served as the bookkeeper for the Terry Dog & Cat Clinic until Bill’s retirement 31 years later. Following her role at the clinic, Drew began working in the clothing business. She loved coordinating style shows, attending buying trips at apparel market, and cultivating lifelong friendships with her clients. Drew was very active in her community and held various roles in the Junior Auxiliary, Fine Arts Club (chairing the Beaux Arts Ball), Community Players, Garden Club, Criterion Club, Hot Springs Women of Prayer, Garland County Prayer Breakfast Committee and various church committees in the First United Methodist Church and Trinity Church, where she was a founding member. Drew lived her life serving others, as she was inspired through a deep faith and her love of God. She chaired three bible reading marathons (two in Hot Springs and one in North Carolina). She was a spiritual leader to many and taught bible classes periodically beginning in 1974. She had a love of travel and went on many mission trips that included India, Mongolia, The Netherlands, Germany, Switzerland, and Mexico. Drew’s philosophy for living was “Prayer Changes Things,” and she served as a leader for opening prayers for the city board of directors for 22 years in Hot Springs. Drew was an avid golfer and she and Bill enjoyed many golf trips with friends over the years. She even wrote a book on golf/spiritual principles. Drew loved her family and had a contagious zest for life and hoped that everyone could experience God’s grace and love. Her family would like to offer their heartfelt thanks to the dedicated healthcare team at Garrett Woods Assisted Living, Arkansas Hospice and her many friends throughout her life. The family held a private burial service at Crestview Cemetery. Memorials may be given in Drew’s honor to Trinity Church, 670 Panama, Hot Springs, Arkansas, 71913 or to Hot Springs Women of Prayer, 431 Brooks Lane, Hot Springs, Arkansas, 71909.

Drew R. Terry, 88, died peacefully Friday, November 26, 2021. Born in Durant, Oklahoma, on September 2, 1933, Drew was the only child of E. C. Reeves and Sylvia Armstrong Reeves of Tishomingo, Oklahoma. In addition to her parents, she was... View Obituary & Service Information

The family of Drew R. Terry created this Life Tributes page to make it easy to share your memories.