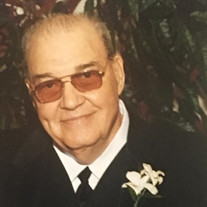 Don Floyd Sanders “Bucky”, 88, of Hot Springs entered his eternal life with his Lord and Savior Jesus Christ on Sunday, February 17, 2019. He made the peaceful transition to Heaven surrounded by his beloved wife and grandchildren. Bucky was the eldest son of the late Rev. George and Fannie Sanders. Bucky was a lifelong resident of Hot Springs and a lifetime member of the First Pentecostal Church. Sanders was predeceased by his son, Rev. Don F. Sanders, Jr; two brothers, George James Sanders Jr. “Jim” and William Dean Sanders “Beans”; one sister and brother-in-law, Eugene and Mary Laverne Cook. Survivors include his wife of 68 years, Frankie Sanders of Hot Springs, Arkansas; daughter-in-law, Karen Sanders of Tulsa, Oklahoma; five grandchildren, Courtneay Sanders, Brittany and Devin Duffield, Chase and Stephani Sanders, Channing and Daniel Pope all of Tulsa, Oklahoma and Adam and Ruthie Sanders of Frisco, Texas; one brother, Herschel and Wanda Sanders of Hideaway, Texas and sisters-in-law, Linda and Judy Sanders. Sanders was affectionately known to his grandchildren and great-grandchildren as “Grand-daddy.” He is survived by ten great-grandchildren, Tristan, Braedon and Hudson Duffield, Tucker and Piper Sanders, Lucy and Emma Pope, Tovah, Ziva and Ardon Sanders. Bucky Sanders received recognition across the nation for his service as a graduate of the United States Army Airborne School as a military parachutist of the United States Army Infantry School, Fort Benning, Georgia. His love for the Word of God was reflected in his diligent study as he graduated from the Agape Bible College in Little Rock, Arkansas. He was dedicated to a life of service. After his service to our country as a member of the United States Army, Bucky trained as a Firefighter, First Class, before his retirement after 21 years of service. He received the American Legion Award for lifetime Membership as part of the United States Armed Services and The John Edgar Hoover Memorial Gold Medal for Distinguished Public Service Award. While working with the Hot Springs Fire Department, he continued his education as a lifelong student and began his career in Security Services. Bucky founded, owned and operated Sanders Security, Inc. in Hot Springs for 50 years. He was a licensed security guard for 50 years and was founder and owner of The Casket Store in Hot Springs. In 2006, Sanders became a lifetime licensed funeral director for the State of Arkansas through the Arkansas Board of Embalming and Funeral Directing. Visitation will be Wednesday from 6:00 to 8:00 PM at Hot Springs Funeral Home. Funeral Services will be 10:00 AM Thursday at the First Pentecostal Church, 222 East Grand Avenue with Reverend Adam Sanders and Reverend Chase Sanders officiating. Burial will be at Crestview Memorial Park.

Don Floyd Sanders &#8220;Bucky&#8221;, 88, of Hot Springs entered his eternal life with his Lord and Savior Jesus Christ on Sunday, February 17, 2019. He made the peaceful transition to Heaven surrounded by his beloved wife and grandchildren.... View Obituary & Service Information

The family of Don "Bucky" Sanders created this Life Tributes page to make it easy to share your memories.