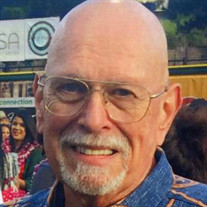 Don Anthony Joyce, Sr., 73, passed away on September 29, 2018, in Little Rock following a brief but valiant battle with cancer. He was preceded in passing by his parents, Henry Anthony Joyce and Genevieve Ricks Joyce; a half-brother, John Joyce; a half-sister, Theressa Ingram; and his wife, Norma Hammond Joyce. Don was born October 21, 1944, at the old St. Joseph's Hospital in Hot Springs. He graduated from Hot Springs High School and enlisted in the United States Air Force. Following his service to his country he attended Garland County Community College, Henderson State University, and Baptist School of Nursing. He spent several years employed in advertising at The Sentinel Record and The Village Voice. He also worked as a nurse at St. Joseph's Hospital, Kona Community Hospital in Kealakekua, Hawaii, St. Vincent's Infirmary in Little Rock, and retired from the University of Arkansas for Medical Sciences. Don loved life, laughter, and language. When he awoke each morning, his first words were "Ah, another beautiful day." Few things pleased him so much as a good story evoking a chuckle or belly laugh that he could then pass along. He was a read-aholic and an avid wordsmith and shameless punster. Taking great pride in his service to his country, Don collected a wide range of Air Force memorabilia which overflowed his office. He also amassed an impressive library filled with books of Air Force history and the history of the Cold War. Don also was a great scuba diving enthusiast. He visited the Caribbean at every chance to dive and never missed an opportunity while he lived in Hawaii. He was a proud card-carrying member of PADI, the Professional Association of Diving Instructors. Left to cherish his memory are his wife, Sue Glover Joyce; his son and daughter-in-law, Don Anthony Joyce, Jr. and Amara Joyce of Waikoloa, Hawaii; granddaughters Skyler and Taylor; step-grandson Justin Tice of Honolulu, Hawaii; a sister, Janice Joyce; and special friends, Sparky and the Girls. Don was a devout Catholic whose faith sustained him during his illness. He was a member of St. Andrew's parish in Little Rock. A Memorial Mass will be 1:00 PM Friday October 12th at St. John’s Catholic Church with Father YC officiating. Graveside services will be 1:00 Monday October 15th at the Arkansas State Veterans Cemetery with full Military Honors. Memorials may be made to the Humane Society of Garland County, 1249 Ault Loop, Lonsdale, AR 72087; or Guardian Angel Cat Club, 907 Hobson, Hot Springs, AR 71913.

Don Anthony Joyce, Sr., 73, passed away on September 29, 2018, in Little Rock following a brief but valiant battle with cancer. He was preceded in passing by his parents, Henry Anthony Joyce and Genevieve Ricks Joyce; a half-brother, John Joyce;... View Obituary & Service Information

The family of Don Anthony Joyce Sr. created this Life Tributes page to make it easy to share your memories.