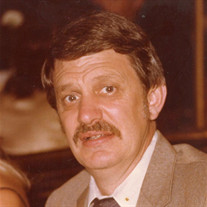 Harry Donald "Don" Brown was born on September 11, 1939 in Heavener, OK. He went to his heavenly home on June 3, 2016 in Hot Springs, AR. Don attended church at Lakeview Assembly of God Church in Hot Springs, AR. Don was preceded in death by his parents Edward and Marjorie Brown. He is survived by his loving wife, Darlene Brown; his two beloved children, Nancy Delorme (Chris) of Camden, AR and Brandee Johnson (Andrew) of Hot Springs AR; his devoted grandchildren, Lance Delorme (Mariah), Skylen Delorme, Jaden Johnson, and Kylee Johnson; his brother-in-law, Gary White (Sherry) of Russellville, AR; a number of nieces, nephews and great nieces & nephews. Don had many colorful careers from serving in the Army at Okinawa Japan, a Blackjack dealer, a fire fighter for the forest service in Nevada, and a gifted salesman in the Southeast United States. Don influenced many people with his kind heart and actually practiced what he preached. He was one of the nicest men you would have ever met, he never met a stranger and he never had a bad word to say about anyone Don loved to travel with his family. He especially loved to snow ski and go to the beach. He loved to fish (crappie and bream were his favorite.) He learned to play golf and bowl after he retired and actually enjoyed the games. Don had a heart filled with joy. He lived a full and happy life filled with love and laughter. His favorite quotes were "go until you hear glass", "loose lips sink ships" and "it will feel better when it quits hurting' Pallbearers are Chuck Clinton, Chris Delorme, Andrew Johnson, Jerry Way, Matt Weatherford, Gary White, and Sean White. Honorary Pallbearers are Lance Delorme, Ben Berley, Peny Pasco, Rex Tyler, Kenny Sailors, David Jacques, Mike Stanfield, Harvey Clinton, Robert Fisher and Mike Parker. Visitation for Don will be from 12 to 2 pm at Hot Springs Funeral Home, Hot Springs, AR with the funeral service starting at 2pm Thursday. Interment will follow directly after the service at Crestview Cemetery. Memorials may be made to Lakeview Assembly of God Church, Hot Springs, AR

The family of Don Brown created this Life Tributes page to make it easy to share your memories.