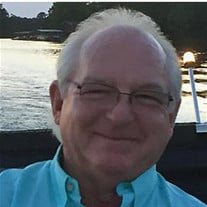 David (Dave) L Hicks, Sr., 70, of Hot Springs passed away Friday September 1, 2017. He was born March 17, 1947 in Knoxville, TN. He is predeceased by his parents, James Melvin Hicks, Sr. and Marion Vann Hicks Cate. Dave was a member of Black Oaks Heights Baptist Church in Knoxville and was a Mason with Charles H. McKinney Lodge #433. He is survived by his loving wife, Karen Hicks of Hot Springs, AR; his son, David L. Hicks, Jr., and partner, Joey Tate of Knoxville; his daughter, Stephanie Reagan and husband Todd of Plant City, FL ; two beautiful granddaughters, Lindsey Martinez and husband Ivan of Lemoore, CA, and Ashton Brewer and husband Devin of Plant City, FL; his brother, James Melvin Hicks, Jr. of Nashville; brother-in-law, Bob Shipley of Knoxville and his sister, Sandra Lawson of Knoxville as well as many nieces and nephews. He is also leaving behind his family in Pennsylvania, Nicole and Evan Bottomley, and grandchildren, Sydney Bottomley and Damen Crowe. Dave was employed for 27 years as a Carman & Assistant Department Foreman with the L & N Railroad in Knoxville, Dept. Foreman with Seaboard System RR and General Foreman with CSX Transportation. He was also employed for 15 years with US DOT, Federal Railroad Administration and worked as a Motive Power and Equipment Inspector in New York and in Arkansas. His friends all called him Super Dave since there was no job too large that he couldn't tackle. As Dave always said - "I'm a Master Mechanic and I have a certificate for that!” Dave was never one to sit still. He enjoyed snowmobiling in New York and in Arkansas he went 4-wheeling, and his favorite past time was boating on Lake Hamilton. He was a member of the "Red-neck Yacht Club". His wish is that all his friends have a large party and have a cold one for him! He will be truly missed. Services will be 2:00 P.M. Tuesday, September 5th at Hot Springs Funeral Home. Entombment will be at Memorial Gardens. Pallbearers are David Hicks Jr., Clay Matchett, Todd Matchett, Ralph Cross, Larry Onstott, and Jerry Clenney. Honorary Pallbearers are Todd Reagan, Joey Tate, Tom McGuire, Mike McGuire, and the Bleu Monkey Grill Friends.

The family of David (Dave) Hicks created this Life Tributes page to make it easy to share your memories.