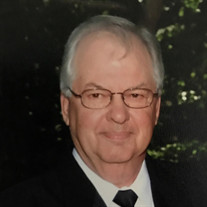 Darrell Van Smith of Hot Springs, AR died Sunday May 6, 2018 after a long fight with cancer. He is survived by Nancy, his loving wife of nearly 55 years, his sons Scott Smith and Grant (Amanda) Smith, granddaughter Gwyneth Smith, mother Mildred Smith, brother Winston Smith, sister Marge Grisham, and a large extended family. He was preceded in death by his father, Van Smith. Darrell was born Dec. 5, 1938 in Mt. Pine to Van and Mildred Smith. He grew up in Hot Springs and was a 1956 graduate of Lakeside High. He obtained a Bachelor’s degree in Psychology from Hendrix in 1960. He went on to earn a Master’s Degree in Theology from Southern Methodist University in Dallas and pursued post-graduate work at the Institute of Religion at the Texas Medical Center in Houston. After six years of serving the United Methodist Church as a Minister to congregations in White Hall, Eudora, and Camden, he and Nancy moved back to Hot Springs to serve the community he loved and raise their family. Here, he was the Director of Economic Planning for the West Central District of the Arkansas Planning & Development writing the first grants that established Garland County Community College, Mid-America Park, and Mid-America Museum. Darrell also wrote the proposal to the Governor’s Office on Aging establishing the Area Agency on Aging of West Central Arkansas and then led as Executive Director for 25 years. Throughout his tenured career at the AAA, Darrell was honored with many awards and his calling to serve the elderly was fully realized. Darrell’s dedication to services for the Aging kept him busy throughout his professional career and retirement. Some of his volunteer leadership included chairing the Arkansas Assoc. of AAA Directors, serving on the original Board for the National Assoc. of Area Agencies, chairing the National Rural Aging Conference, an appointment to the Governor’s Advisory Committee on Aging by two Governors, and serving on the Board of Directors for Levi Hospital and the Levi Tower Housing Advisory Board for over 30 years. Most recently, he acted as board Co-chair to the Oaklawn Center for Aging from its inception until last year. Darrell was known as an avid hunter and fisherman, amateur photographer, music enthusiast, and Oaklawn Racing fan. He passed on his outdoor passions to his sons, leading them to build a cabin in the Fourche Valley. His interest in archeology and Native American artifacts flourished after discovering many unique artifacts on their farm. He joined the Ouachita Chapter of the Arkansas Archeological Society and was honored to have his extensive collection of double-bitted axes serve as the basis for a Master’s thesis at the University of Arkansas, Dept. of Anthropology. Of all his many life accomplishments, Darrell’s proudest is his family. He met Nancy Edwards in Camden in 1962 while working as an Assoc. Pastor at the First United Methodist Church before attending SMU. They married on June 23rd, 1963. She has been his partner in life, work, and travel. Together, they traveled to 6 continents, 20 countries, and nearly all 50 states. Some of the highlights included the Great Barrier Reef, New Zealand, and Indonesia. His sons have been a source of pride, but Grampers’ greatest joy was his granddaughter. Darrell adopted a credo early in his Methodist career: “we are here to help.” He stayed true to that motto throughout his life and is proud to pass that legacy on to his family. Honorary Pallbearers will be the Lakeside Class of 1956. A Celebration of Life will be held in the Klipsch Amphitheater at Garvan Woodland Gardens on Friday May 11th at 1:30pm. The family will receive guests following the ceremony. In lieu of flowers, memorials may be made to the Klipsch Amphitheater.

The family of Darrell Van Smith created this Life Tributes page to make it easy to share your memories.