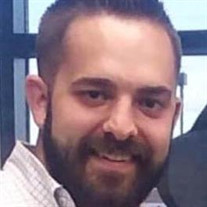 Colton Jim Owen, 25, of Pearcy, Arkansas passed away Thursday, August 29, 2019. He was born December 10, 1993 in Hot Springs, Arkansas. He was General Manager of Camping world was of the Baptist faith and was an avid fisherman. He was predeceased... View Obituary & Service Information

The family of Colton Jim Owen created this Life Tributes page to make it easy to share your memories.