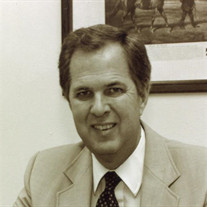 Chester Harris Lauck, Jr., 75, of Hot Springs, passed away December 1, 2015. Born December 30, 1939, to Chester Harris Lauck and Harriet Wood Lauck in Los Angeles, California, he was of Methodist faith. He is preceded in death by his parents, and sisters Nancy Lauck Mertens and Shirley Lauck Babcock (Dwight). He is survived by his wife, Karen Greenley Lauck, daughters Nancy Lauck and Amanda Lauck Glickman (Jeff) of Pensacola, Florida; sons Scott Greenley Lauck and Chester Harris Lauck, III (Angie) of Little Rock, and grandson Chester Harris Lauck, IV of Little Rock; brother-in-law Dwight Babcock of Rancho Santa Fe, California, nephew Mike Mertens (Susan) of Sainte-Rose-Du-Lac, Manitoba, Canada; nieces Susan Babcock of Carlsbad, California and Janie Babcock Sexton (Bobby) of San Diego, California and great nieces and nephews from California and Canada. Lauck attended the University of Arkansas, where he was a member of Sigma Chi Fraternity. After college, he launched a career in marketing and advertising in Houston, and served as Director of Advertising for the Petro-Chemical Division of Gulf Oil in New York City. In the late 1960s, he joined his father’s advertising and public relations firm as junior partner. Following that stint, he worked for Cooper Communities in real estate sales for thirty-five years and later for Remax in Hot Springs Village. Chet, as he was called, was revered for his intellect, his creativity and his sophisticated sense of humor. A classic car enthusiast, he worked with mechanics on a pit crew in high school. His interests ranged from photography and music to shooting skeet and sporting clays at Blue Rock Sportsmans Club in North Little Rock. His buddies there brought a gleam to his eye. He was Master of local Masonic Lodge 62, and he was active in the leadership of the Ouachita Area Council of Boy Scouts of America, where both his sons became Eagle Scouts. He took pride in his children’s accomplishments and celebrated them individually and collectively. His grandson brought special joy to his life, and he, too, was a great source of pride. He will be remembered as a loving patriarch and friend. Honorary pallbearers are Dr. John Bond, David Bunch, John Burford, Courtney Crouch, Jr., Dr. Martin Koehn, Dave Reagan and Dr. Eugene Shelby. A visitation will be held 6:00 PM to 8:00 PM Friday December 4th at Hot Springs Funeral Home. The Memorial Services will be at 11:00 AM Saturday December 5th at Hot Springs Funeral Home with Reverend George Tanner officiating. Memorials may be made to the charity of the donor’s choice.

Chester Harris Lauck, Jr., 75, of Hot Springs, passed away December 1, 2015. Born December 30, 1939, to Chester Harris Lauck and Harriet Wood Lauck in Los Angeles, California, he was of Methodist faith. He is preceded in death by his parents,... View Obituary & Service Information

The family of Chester Harris Lauck created this Life Tributes page to make it easy to share your memories.